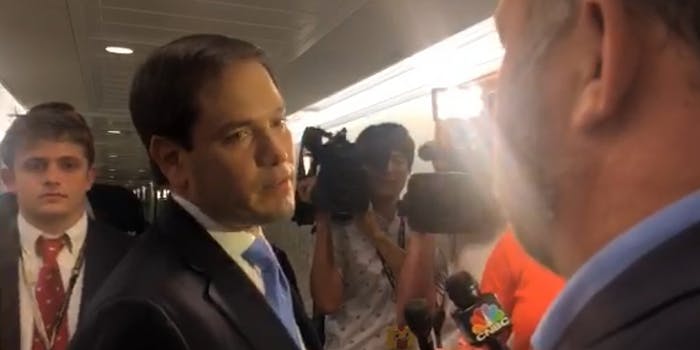 Alex Jones, the currently besieged host of InfoWars, confronted Sen. Marco Rubio (R-Fl.) in the U.S. Capitol, after Rubio’s questioning Wednesday during the Senate’s hearing on Twitter and Facebook.

Jones, along with other far-right social media stars like Jack Posobiec, Chuck Johnson, and Laura Loomer, found a seat in the front row during the hearing. While there wasn’t any disruption during the hearing itself, Jones caused a scene in the Senate hallway after Rubio stepped out.

While Rubio was in the midst of an interview, Jones walked up beside him and started asking questions about conservatives being purged conservatives from social media sites. Jones continued to interrupt and goad Rubio until he fully derailed the interview.

After Jones called him a “frat boy,” Rubio turned to him and said, “Who are you, anyway?”

Then, things got really heated.

At one point, Jones touched Rubio on the shoulder; Rubio, getting increasingly agitated, told Jones not to touch him again.

“I was just patting you nicely on the shoulder,” Jones said

“You’re not gonna get arrested,” Rubio said. “I’m gonna take care of you myself.”

Jones then announces to the crowd that Rubio threatened to beat him up.

While it’s never appropriate for a Senator to threaten someone, it is illuminating to watch the video of Jones interacting with Rubio.

Watching the video, taken by Gateway Pundit author Cassandra Fairbanks, is like watching Jones and his ilk’s free-speech debate play out in person. By lying, goading and irritating, they provoke a particular, built-up reaction, then act victimized when the scene plays out as expected.

Jones currently has not pulled any other antics, but he’s promised to confront Jack Dorsey after the hearings.