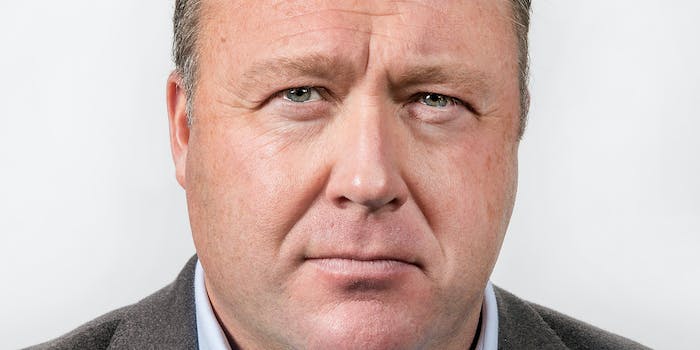 The judge entered default judgments against Jones and Infowars.

A judge has ruled against Alex Jones and Infowars in two cases brought by families of victims of the Sandy Hook mass shooting.

Relatives of the victims, which included 20 young children and six adults, subsequently sued both Jones and Infowars.

The first case was filed in 2018 by Leonard Pozner and Veronique De La Rosa, whose six-year-old son, Noah, was killed in the shooting. They alleged Jones had defamed them and that they’d been harassed by people who believed his lies about the 2012 shooting.

A total of nine families have filed similar cases against Jones and Infowars.

At one point during a deposition in the cases, Jones blamed a form of ‘psychosis’ for his lies about the mass shooting.

In a default judgment, the court rules against one party without determining the merits of the case. It’s most often invoked when the defendant fails to appear in court.

The judgments were entered in two separate cases filed by Pozner and De La Rosa and another parent, Scarlett Lewis, whose six-year-old son, Jesse, was also killed in the shooting.

In the order, Judge Maya Guerra Gamble took Jones to task for “intentionally disobeying” court requests and “flagrant bad faith and callous disregard” for the cases.

“An escalating series of judicial admonishments, monetary penalties, and non-dispositive sanctions have all been ineffective at deterring the abuse,” she wrote.

An attorney for the parents told CNN that the default judgments gave them “the closure they deserve.”

“Mr. Jones was given ample opportunity to take these lawsuits seriously and obey the rule of law,” attorney Mark Bankston said. “He chose not to do so, and now he will face the consequences for that decision.”

In a statement, Jones and Infowars’ attorney Norm Pattis called the ruling “stunning.” They claimed, “It takes no account of the tens of thousands of documents produced by the defendants, the hours spent sitting for depositions and the various sworn statements filed in these cases.”

The statement is posted on Infowars’ website. It also accuses Judge Gamble of abusing her discretion and alleges the ruling “crucified” the First Amendment.

Jones’ attorney has declined to comment. “I haven’t really analyzed [the rulings], so I don’t know exactly what is going to happen,” attorney Brad Reeves told HuffPost.

The judgment follows a string of setbacks Jones has had with the cases. Reeves is reportedly the seventh attorney to represent him. Last year, Jones was ordered to pay $150,000 for Sandy Hook families’ legal fees because he failed to provide discovery documents.

The court will now convene a jury to determine damages in the cases.