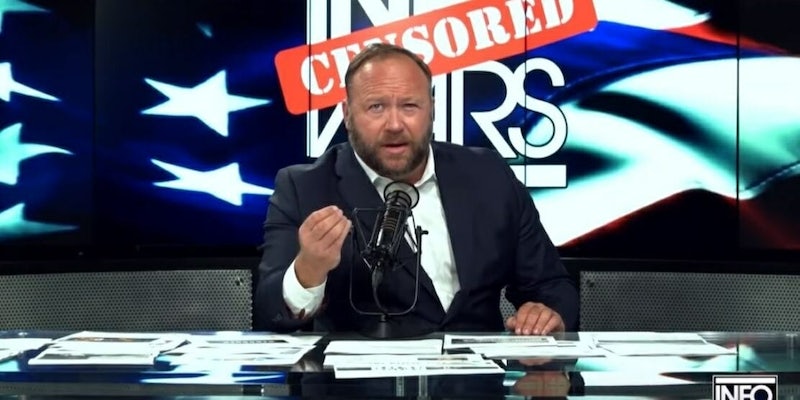 He's having a rough week.

In another blow to Alex Jones’ InfoWars franchise, Apple has removed the channel’s app from its App Store, further limiting Jones’ ability to spread his conspiracy theories.

The news comes on the heels of a very bad month for Jones, in which his content was banned from Facebook, iTunes, YouTube, and Spotify, among others. A spokeswoman from Apple said, via the New York Times, that the app was removed for violating Apple’s policy for content that is “offensive, insensitive, upsetting, intended to disgust, or in exceptionally poor taste.”

Jones has long complained that he and other conservative writers are being censored from various platforms. Last week, Jones, along with fellow right-wing provocateurs Laura Loomer, Chuck Johnson, and Jack Posobiec sat in the front row of the Senate social media hearings. Jones confronted Sen. Marco Rubio about supposed Twitter censorship, and Loomer interrupted a portion of Twitter head Jack Dorsey’s hearing.

Earlier this week, Twitter permanently banned Jones from its platform and from Periscope, which it owns. Dorsey had previously made the controversial decision not to ban Jones from his platform, overriding his staff members to keep Jones on the platform.

Jones still has his website and his name recognition to help drive viewers to his content, but as the Atlantic notes, banning far-right content, hateful content and conspiracy theorists from major social media platforms does have an effect. Milo Yiannopoulos, the far-right media personality who formerly wrote for Breitbart, recently wrote a screed on Facebook about how he’d lost money, support, and influence. Yiannopoulos was permanently banned from Twitter in 2016.

Jones responded to his Twitter ban with an unhinged video talking about “Operation 666,” a confusing conspiracy theory about an attack on America.

Alex Jones is dealing well with his Twitter ban pic.twitter.com/jFmN7Zfqsb

Jones has not responded to his ban from Apple as of press time. His content is still available through the Google Play store.