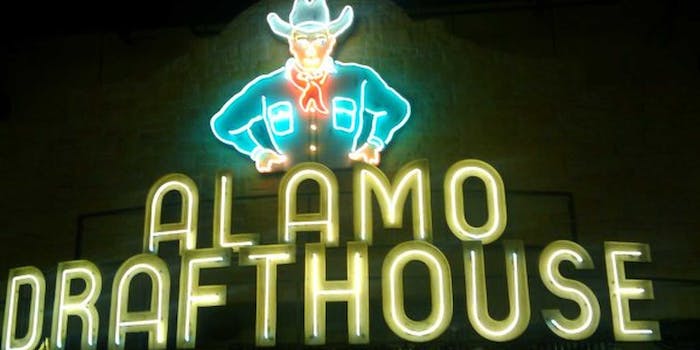 The Austin, Texas–based chain is looking to expand its reach.

When the executives of the Alamo Drafthouse Cinema chain decided to hold a Reddit AMA, they never expected to encounter the gripes of a former—and disgruntled—employee.

The Austin, Texas–based chain of movie theaters, which prides itself on quality cinema and strict adherence to audience etiquette, is preparing to expand its reach. On May 30, CEO Tim League and several high-ranking colleagues collaborated on a Reddit AMA session.

“Since we are expanding to several new cities this year, I thought I would bring together a few folks from the Alamo to answer any questions you might have,” wrote CEO Tim League under the handle AlamoDrafthouse.

The most-upvoted comment belonged to redditor zooeyandfranny, who identified himself as a proud patron of the establishment—and a former employee who is not keen about certain policies undertaken by management.

Hi Tim and team. I love going to Alamo Drafthouse. I think they do film screening the right way. I love the no texting. I love the food. I love the film selection.

HOWEVER, I also used to work at one of your Austin locations, and my coworkers and I were constantly scheduled just under 30 hours a week (the minimum you have to work in order to receive health benefits from the Drafthouse). Is there a policy among the administration to put pressure on managers to schedule most workers just under 30 hours?

“Definitely no policy for keeping people under 30 hours. I prefer people to have insurance and I’m proud that we offer it. I know some people who were in that situation asked managers for other work to get a few hours and we found it for them,” he wrote.

zooeyandfranny – I can’t fix what problems you were having if you’ve left the company. All I can do is talk to HR after I’m done here and make sure everyone in management knows that health care for our employees is a priority for me. I’m emailing him now to follow up.

metaranha seemed content with the response, but still drove home his point regarding insurance.

I understand that many businesses don’t HAVE to offer health care, but doing so while actively disqualifying people by doing things like allowing them to work right up to the cut-off for the specific purpose of disqualifying them doesn’t make you a hero. It makes you just like every other business owner doing right by his wallet before his people.

I hope you do follow up with HR and make sure your company isn’t one of the overwhelming majority that does this.

Again, League heard his sentiments and offered a response.

“We have lots of folks who just work on the weekends when we are busy,” he said. “We can’t afford to offer it to those employees who just work a couple shifts. We employ lots and lots of people who have been with us for years and they maintain their hours just fine. There’s really nothing more I can say to this without repeating myself. I will follow up with HR and make sure nothing is broken that I don’t know about.

“Managers at Alamo don’t bonus on health care costs, btw, there would be no incentive for them to do this. As of last year, managers bonus on 3 factors: employee satisfaction, we measure this with anonymous surveys, customer satisfaction (again numerical based on customer polling) and controlling a couple of key costs—health care not being one of them.”

Other highlights from the discussion included questions about the theater’s history, its movie selection, and, of course, its strict rules for audience members.

What film screening did you regret the most? (UncleTito4Prez)

When SNAKES ON A PLANE came out we hired a local “rattlesnake juggler” to come put on a show before the movie. As they were pulling the snakes out of their burlap sack, the juggler’s assistant was almost immediately bit. Pulling his hand back in shock he dropped the rattler which quickly slithered out into the crowd. As everyone screamed and jumped up on their seats the bitten guy whipped out a giant knife and slashed his hand open to drain out the venom, spraying blood everywhere. Actually I guess that was great. No regrets.

As you’ve noticed there’s a lot of criticism that gets kicked around in the /r/Austin Sub-Reddit about how the Alamo Drafthouse is changing. In typical Austin fashion it was more or less insinuated that Alamo Drafthouse has gone mainstream and thus has lost the things that made it great. That being said, what would you like to say to those Austinites out there that see their beloved movie theater spreading across the country and are worried the Golden Age of Alamo is behind us? What is different/same with the Alamo theaters being built outside of Texas? Thanks and keep it weird. (OFTHEHILLPEOPLE)

“I struggled at first with the idea of expanding, but then I changed my perspective and really wanted to expand. By expanding we can do more to find a larger audience for the weird, oddball films we love. That is why I started Drafthouse Films, for example. A film like Miami Connection would never have found a large national audience without the expansion. As for those who say we are losing what was once great about Alamo, I disagree. I think we have incredible programmers right now. We are still executing the great series we were doing years ago, but are always adding new things. I’m still doing my best to keep the company on track and I don’t think my tastes have changed all that much,” League himself answered.

who’s the biggest dick you’ve ever kicked out? (loveu157)

Several years ago we had a guy in a screening at our Lamar location. One of our programmers (Lars) happened to be in the screening and when this ‘guest’ started making some chatter during the feature, he was warned right away. The warning did not do the trick and so as the manager in the building at the time, Lars came to grab me.

Having done more than a few ‘kick outs’ I was pretty comfortable. So, I went in and asked the guest to step out in the lobby to talk to me. His response was a rather loud “[email protected]@k you!.”

So I collect myself and go back in and tell the guest if he does not come outside to chat with me, I have to call the cops. The guy responds with “[email protected]@k you, call the cops!”

Well, as it turns out we had an advance promo screening and often the studios send in security to watch for piracy. Turns out the security team all had day jobs as prison guards.

So this time I walk back in with three suited security guards and the guy decides to step outside with me, but he spends the better part of the next several minutes berating us, before eventually being ‘escorted’ outside.

He eventually realized that if he stayed on site, he was going to end up going to jail.