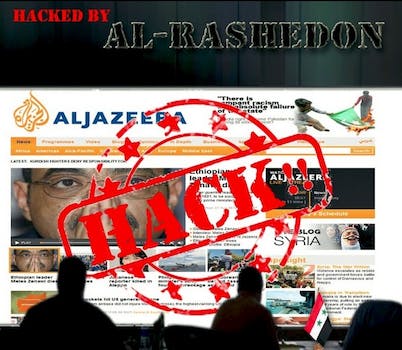 Al Jazeera’s website has been hacked by Syrian loyalists.

The Qatar-based news outlet was compromised Tuesday afternoon, according to Reuters. The hackers, who carried out the attack under the umbrella name al-Rashedon, reportedly claimed that Al Jazeera was showing support for “armed terrorist groups and spreading lies and fabricated news.”

The homepage of Al Jazeera’s website showed a Syrian flag, a screenshot of the usual homepage with a stamp reading “HACK!!” overlaid, and a statement in Arabic about the network’s alleged bias against Syrian citizens and the government.

The Syrian uprising against President Bashar al-Assad begun in March 2011 and has left thousands dead. The conflict has spilled online as activists from both sides target major news outlets in an effort to have their voices heard.

Reuters is not immune to the attacks either. One of its key Twitter accounts and its blog network were hacked in early August.