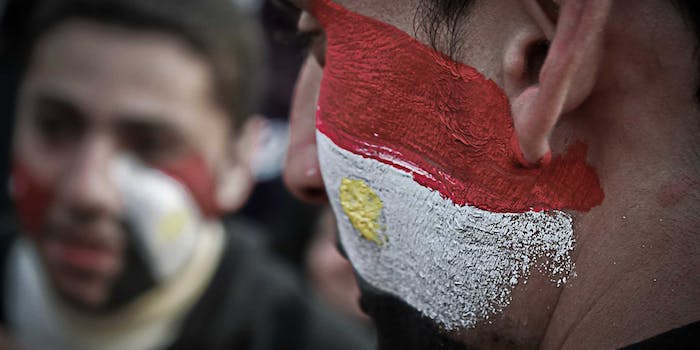 "Journalism is not a crime."

Three journalists have been convicted of conspiring with the Muslim Brotherhood to spread misinformation about civil unrest in Egypt.

The three men were reporting for Al Jazeera at the time of their arrest in December. Mohamed Fahmy, a Canadian citizen, and Peter Greste, an Australian, were sentenced to seven years in prison; Baher Mohamed, an Egyptian, was sentenced to ten years. Those three extra years were added, apparently, for his possession of a spent bullet Al Jazeera says he’d recovered as a souvenir of a protest.

“The verdict provides further evidence that Egyptian authorities will stop at nothing in the ruthless campaign to crush anyone who challenges the official narrative, regardless of how questionable the evidence against them is,” said Philip Luther, Amnesty International’s director for the Middle East and North Africa in a statement to the New York Times.

“When asked by the court to screen the allegedly false news reports obtained from the defendants’ laptops, prosecutors showed images that included Mr. Greste’s family vacation, horses grazing in a pasture in Luxor, Egypt, and a news conference by the Kenyan police that Mr. Greste had covered in Nairobi,” the Times reports.

According to Al Jazeera, prosecution evidence also included “a BBC podcast, a news report made while none of the accused were in Egypt, a pop video by the Australian singer Gotye, and several recordings on non-Egyptian issues.

“This is not a system,” Fahmy’s brother told the Guardian. “This is not a country. They’ve ruined our lives. It shows everything that’s wrong with the system: it’s corrupt. This country is corrupt through and through.”

The conviction of Fahmy, Greste, and Mohamed have sparked news outlets, journalilsts, and free speech advocates around the world to join the #FreeAJStaff campaign, launched Sunday both online and through a full-page advertisement in the New York Times by Al Jazeera.

A powerful message on the back page of today’s New York Times. @PeterGreste #FreeAJStaff pic.twitter.com/s70z4VAgsF

The conviction comes just as Secretary of State John Kerry has signaled that the United States’ relations with Egypt are returning to normal, including the delivery of several Apache attack helicopters. In a statement released Monday, Kerry called Egypt’s conviction of the journalists “chilling” and “draconian.”

“Today’s conviction and chilling, draconian sentences by the Cairo Criminal Court of three Al Jazeera journalists and fifteen others in a trial that lacked many fundamental norms of due process, is a deeply disturbing set-back to Egypt’s transition. Injustices like these simply cannot stand if Egypt is to move forward in the way that President al-Sisi and Foreign Minister Shoukry told me just yesterday that they aspire to see their country advance.”