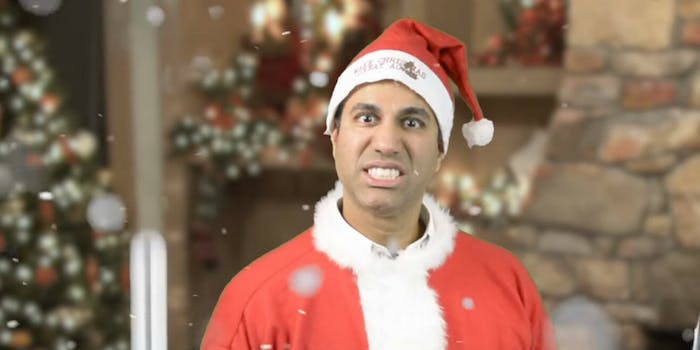 The facts don't add up.

The FCC under chairman Ajit Pai boasted that destroying net neutrality is already improving broadband deployment and competition in the United States. There’s just one problem: the data it’s using to support those claims was collected prior to Pai taking office and long before the repeal of net neutrality.

Each year, the FCC is required to release an annual report about the state of broadband competition and deployment in the U.S. The broadband deployment report is made to show Congress that the infrastructure needed to provide internet to rural and low-income areas in America is being deployed in a timely manner. If the FCC fails, it would be forced to take action.

Because members of the FCC have close ties to broadband companies, it’s not unusual for the figures in these reports to get manipulated or, at the very least, presented so things appear better than they are. The FCC’s latest report is a classic example of taking things out of context.

A press release posted alongside the latest broadband report claims that “steps taken last year have restored progress by removing barriers to infrastructure investment, promoting competition, and restoring the longstanding bipartisan light-touch regulatory framework for broadband that had been reversed by the Title II Order.”

But the report cited as evidence for these statements doesn’t offer insight into the progress being made post-net neutrality repeal. That’s because the data contained within the document only covers broadband deployments through December 2016. Pai was elected chairman of the FCC in January 2017 and repealed net neutrality in December. (The repeal won’t take effect for another two months.) Given these conflicting timelines, it would be impossible for Pai to draw conclusions about net neutrality from the 2017 report.

It doesn’t stop there. The report goes on to claim that “the marketplace is already responding to the more deployment-friendly regulatory environment now in place,” citing net neutrality as a main reason for the turnaround.

“For instance, several companies, including AT&T, Verizon, Frontier, and Alaska Communications either commenced or announced new deployments in 2017,” the report concludes. “These new deployments are initial indicators that deployment is likely to accelerate again in part due to our recent efforts.”

What it fails to mention is that three of the four deployments were already in place during the Obama administration and all four internet providers had announced broadband expansions before Pai took over.

Furthermore, the report claims that “advanced telecommunications capability is being deployed to all Americans in a reasonable and timely fashion,” despite evidence showing that two-thirds of U.S. homes don’t have internet speeds up to 25 Mbps from more than one provider.

Other FCC commissioners noticed the discrepancies and didn’t hold back their anger. In a statement, FCC Commissioner Jessica Rosenworcel called the FCC’s conclusion that broadband is being quickly deployed to U.S. households “ridiculous and irresponsible.” She continued, “To call these numbers a testament to our national success is insulting and not credible.”

She continued: “There are 19 million Americans in rural areas who lack the ability to access high-speed services at home. There are 12 million school-aged children who are falling into the Homework Gap because they do not have the broadband at home they need for nightly schoolwork.”

FCC Commissioner Mignon Clyburn also released a statement refuting the FCC’s claims that broadband is expanding at a responsible rate. She says 44 million Americans don’t have internet with at least 25 Mbps fixed or 10 Mbps wireless speeds.

What the report does show is that, while the FCC is still not on track, a number of significant broadband deployments occurred under the Obama administration—when the internet still had net neutrality.