Why panels for women in tech aren’t really helping

What if you can't just "have it all"?

On Monday night, women from around the Bay Area sat in plush pink chairs in an auditorium at Airbnb’s San Francisco office, gathered together to hear from two successful leaders in the tech community about what it’s like being a woman in engineering. Neither had very good advice.

There is a conversation about women in technology that we should be having. We need to talk about the very real harassment, systemic discrimination, and the toxic culture that keeps women from pursuing careers in computer science, even as we tell our female children that they should become coding ninjas.

The fiction of the meritocracy and suggestion that confidence and hard work will always win out was once again repeated on Monday night.

Niniane Wang, CEO of Evertoon, and Varsha Rao, Airbnb’s head of global operations, were invited by the home rental company to talk about their careers in the industry as part of Airbnb’s Taking Flight event series. Both are wildly successful leaders, with impressive histories and obvious talent—but their talks fell flat.

“Have blind faith,” that your hard work and actions will eventually be rewarded by your colleagues, Wang said.

“Find the place to work where you can be your authentic self,” Rao said.

During the question and answer session, both women said they hadn’t experienced some negative interactions posed by the audience when they asked for advice, like being considered “bossy,” or forced to conform to the boys’ club environment. 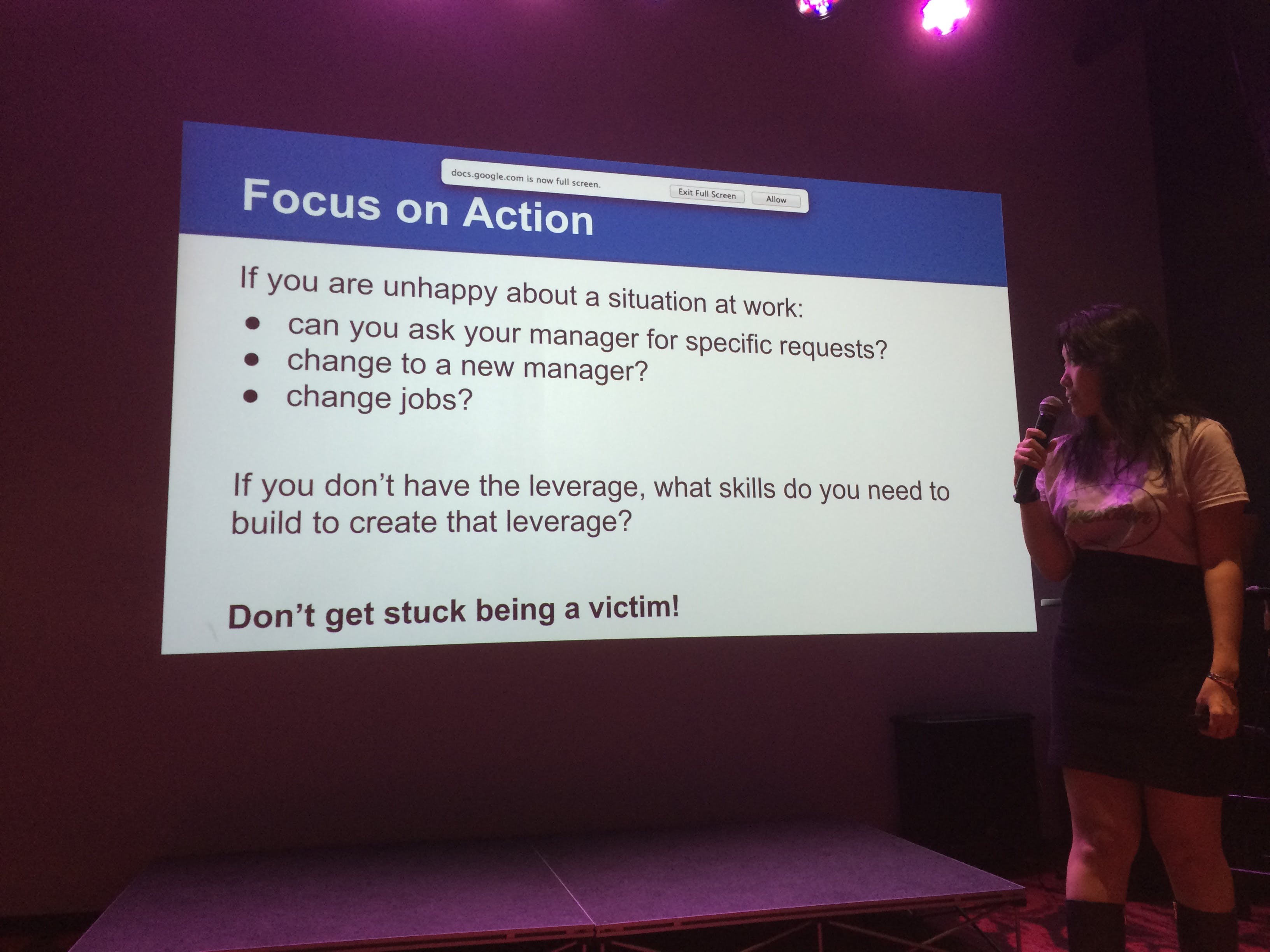 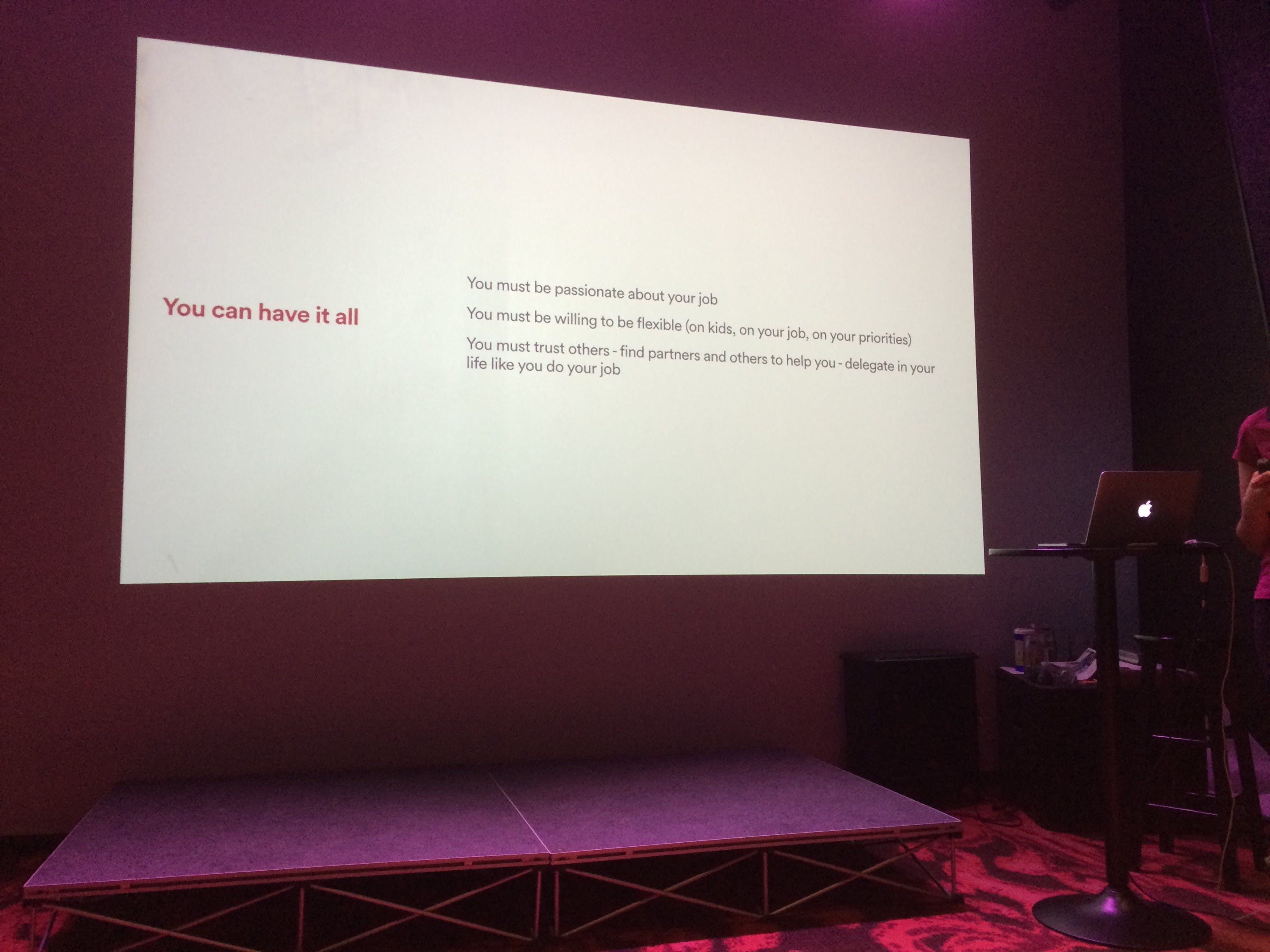 I applaud companies like Airbnb for wanting to have these discussions and hosting events that shed light on these issues. But so often the real conversations don’t actually happen—the same advice which has been given to us from Sheryl Sandberg and repeated in boardrooms everywhere is parroted to a roomful of women who know that leaning in doesn’t always work.

Rao said women can “have it all,” an elusive, so-coveted fantasy. Having it all evokes images of power skirts and six-inch heels that fill the closet of a manager who also helps her children with their homework in the evenings. At least, that’s the stereotype—having it all means different things to different people but it’s generally personal and professional success.

The problem with the “having it all” narrative is that it’s often echoed by women and men who don’t acknowledge the privilege that enables it. Women who don’t face repeated sexism and harassment, who don’t leave their jobs after 10 years in the technology industry like 41 percent of their female peers, and who work at companies that support and nurture positive behavior all have that privilege.

Rao said that she was able to have it all by delegating things to people, including a nanny for her children, while working a successful job at a startup flush with venture capital. She also said having an inspiring mentor and former schoolmate in Sheryl Sandberg, pioneer of the oft-ridiculed Lean In movement, was important to her career development, too.

Neither woman shared a time when they were harassed by a male colleague, or forced to choose their dream career in an unhealthy work environment over feeling safe and confident in their abilities. Privilege is a powerful tool—one that I’m happy people get to experience. But for many women working in the technology industry right now, that privilege does not exist.

When I attended the Grace Hopper Celebration of Women in Computing in October, Colleen Lewis, professor at Harvey Mudd College, hosted a panel on privilege and the myth of meritocracy. She said that by acknowledging experiences that differ from personal ones, people can better understand how to empower others who might not necessarily benefit from the same privileges.

“If we’re thinking about broad-based systematic change, we need advocates within organizations small and large to think about privilege,” Lewis said in an interview following the panel. “And ways within their local control they can disrupt historical advantages that are provided to people with privileges.”

This is important advice for women or men speaking at technology panels advocating for women in technology. It’s a risk speaking up about a culture that needs fixing. As the CEO of Playmatics Margaret Wallace pointed out, “Real dialogue is often threatening to the status quo for all concerned, as someone who’s been on many of these types of panels.”

If you ask any woman in technology to talk about what it’s like in her industry, chances are she will tell you about a time she was ostracized, harassed, bullied, or not taken seriously. These stories are often shared over cocktails or dinners, behind closed doors while peers commiserate.

Let’s advocate for panels on which women are confident to admit they might not last 10 years working in technology, or that in their experience, startups and the people running them can be like Lord of the Flies.

The industry won’t change overnight—company statistics show that although Google, Facebook, or Apple might be working toward diversity in the workplace, it’s still largely dominated by white, male employees. Lines for the bathroom at tech conferences are always longer on the men’s side.

But by speaking up openly and honestly about injustices in the workplace, and learning from both women in leadership positions and those just starting out, we can empower more women to vocalize their truths. Confidence and talent alone might work sometimes, but usually it doesn’t.