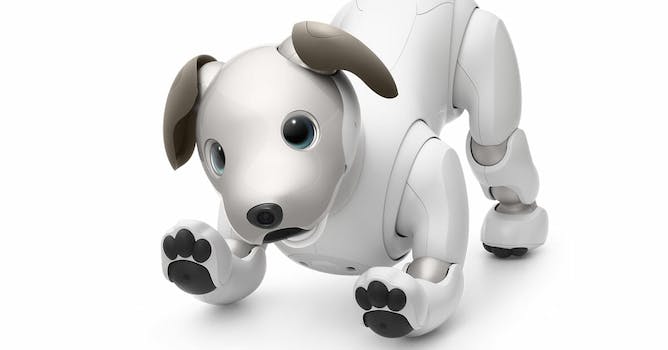 This robotic dog from Sony is finally making its way to the U.S. after long being exclusive to Japan. Starting this September, you can bring home one of the robopups and dote on it day and night—just like you would a real fur baby.

There’s a catch, though. Your obedient and amazing and beautiful Aibo will run you a pretty penny. That is, nearly $3,000. OK, so it’s actually $2,899. But that’s more than a MacBook or a decent entertainment setup in your home. It’s a small nest egg!

But … look how cute Aibo is.

Aibo comes with a selection of toys, an “Aibone” to play with, replaceable paw pads, and other items you can use to spend time with your adorable robot friend. It also comes with a charging station to make sure it’s in tip-top shape every day.

But the robodog is more than just a glorified, mobile Giga Pet. It utilizes artificial intelligence to learn more about you, how you interact with it, and your surroundings. The toy can communicate with the AI Cloud via Wi-Fi or cellular connectivity to keep in touch with its owners, and it has a camera in its nose and on its back to help it get around. It also features tons of sensors that make cuddling it and petting it feel a lot like interacting with a real dog.

The dog’s re-release for Western buyers is limited, so if you plan on owning one of these cute creations, you’ll want to act fast. But unsurprisingly, some people aren’t feeling the exorbitant price for Aibo, no matter how endearing the little guy is.

Aibo dog: „Now that you have bought me, let me tell you: You are feeling poor.“#robodog

To be fair, $3,000 is an awful lot to pay for a robotic dog that you’ll probably mess about with for a few hours and then shut off. But some haven’t let the price tag stop them from dreaming.

And this person has a point. Have you seen vet bills lately?

Hopefully, the future will bring a price drop for Aibo so these cuties can gallop their way into the hearts and homes of more robotic dog fanatics around the world. Bring on cheaper Aibo pets for all!