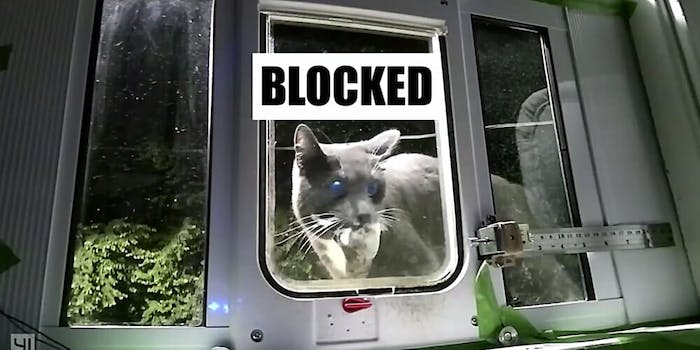 Metric the cat was successfully locked out.

An Amazon employee developed an AI-powered cat door that automatically locks whenever his pet attempts to bring home a dead animal.

Ben Hamm, a senior product manager at Amazon, explained how the contraption came to be during a talk at Ignite Seattle last month.

After his “sweet, murderous cat” Metric repeatedly brought him birds and other half-dead creatures while he attempted to sleep, Hamm came up with the ingenious idea of using machine learning to solve the problem.

Hamm first attached an Arduino micro-controller to a lock on his cat door and placed one of Amazon’s DeepLens cameras directly above. The product manager spent months collecting photos of Metric coming and going before feeding over 23,000 images into Amazon’s machine learning service SageMaker. If the tool detected Metric approaching with an animal, the door would lock for 15 minutes. Hamm would also receive a text message with a picture of his cat and have money automatically donated to the Audubon Society, a non-profit environmental organization.

After running the system for five weeks, Hamm says Metric came inside 180 times without issue and was only inadvertently locked out once. Out of the six times Metric had a dead animal in tow, the AI-cat door successfully locked him out five times.

While the creation was a hit with the audience, Hamm noted that anyone interested in such a device would similarly have to go through the pain-staking process of gathering and labeling thousands of images of their cat.

Not everyone is pleased with the AI-powered cat door. One Twitter user noted that the contraption does nothing to stop his cat’s “killer instinct” and still results with dead wildlife regardless.

@BBCNews Cat flap uses AI to punish pet's killer instincts https://t.co/AAedGSjPHe @amazon No it doesn't punish the cat at all, it wont stop a cats killing instinct either. #BenHamm has achieved nothing. Wildlife still dies. Your cat is still unprotected outside. #KeepCatsInside!

Hamm noted in a remark to another Twitter user that he had looked into whether he could dissuade Metric from killing other animals but that cats do not respond to negative reinforcement.

Correction 4:54pm CT, July 2: An earlier version of this story incorrectly identified so-and-so’s title. He is a product manager.