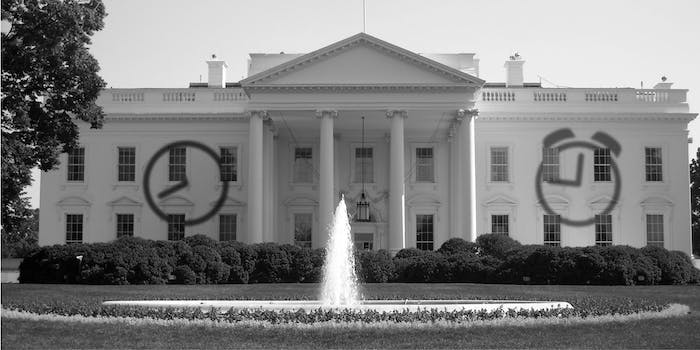 More than a month after #IStandWithAhmed, the teenage clockmaker finally met President Obama.

President Barack Obama was serious when he invited Ahmed Mohamed to the White House.

The 14-year-old Muslim boy from Irving, Texas, who rocketed to Internet stardom after police handcuffed and detained him for bringing a homemade clock to MacArthur High School, visited 1600 Pennsylvania Avenue Monday night for the White House’s “Astronomy Night” event.

White House Press Secretary Josh Earnest said before the event on Monday that Obama had no plan to meet Mohamed, according to the Dallas Morning News. However, Mohamed did manage a brief greeting with the president following the event, reports the USA Today, by making his way to the front of the crowd, which included 300 students, 11 astronauts, and Bill Nye the Science Guy.

Like Obama, Clinton tweeted her support for Mohamed last month, soon after he became an Internet celebrity. Many other supporters used the opportunity to raise awareness about Islamaphobic practices.

“I felt really happy that I got support from the president,” Mohamed told the Dallas Morning News on Monday morning. “It’s really amazing that he helped me.”

Not everyone supported Mohamed’s White House visit. Sen. Ted Cruz, a Texas Republican and 2016 presidential candidate, accused Obama of dividing the country by supporting the teenager.

“President Obama, at every stage, tries to politicize what happens, whether it is this teenager here in Texas, whether it is the shootings we saw in the Pacific Northwest,” Cruz said in Plano, Texas, on Sunday, according to the Morning News. “Over and over again, sadly, he seeks to try to divide us, to try to tear us apart. The president really ought to be looking for ways to bring us together, to unify us.”

The only thing missing from Monday night’s event was Mohamed’s clock, which Obama asked him to bring to the White House. Mohamed told the Morning News that he couldn’t bring it since he had been traveling from Sudan after meeting President Omar al-Bashir there last Wednesday and did not have time to retrieve it from his home before heading to Washington.