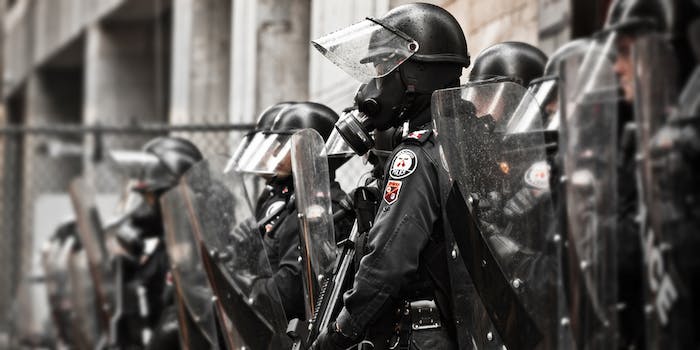 The unrest in Missouri continues.

With the anniversary Sunday of Ferguson, Missouri, police officer Darren Wilson fatally shooting Michael Brown, plenty of eyes have focused on the area to see if tempers would flare.

On Sunday protesters took to the streets in Ferguson peacefully, though late that night a St. Louis County officer shot a man after, according to the police, “officers came under heavy gunfire.” On Monday there was more controversy when two black activists were arrested and two journalists who covered the original protests were charged by police with trespassing and interfering with an officer.

While protesting in front of the federal courthouse in downtown St. Louis, officers from the Department of Homeland Security arrested #BlackLivesMatter activists Johnetta Elzie and DeRay Mckesson.

Earlier in the day, Elzie had tweeted this.

If I'm arrested today please know I'm not suicidal. I have plenty to live for. I did not resist, I'm just black.

So, what happened on Monday?

They arrested @Nettaaaaaaaa for documenting police. They arrested @deray for questioning the arrest. This is the Black experience.

Mckesson later tweeted about his experiences in custody, in which he wrote that he was mistreated by U.S. Marshals who refused to give Mckesson and Elzie their names and who later dragged Mckesson to a cell with his hands zip-tied behind him after Mckeeson refused to move from the floor.

A U.S. Marshal said, "You're in my house now," and we completely lost it in the hallway. Then the supervisor had to come out. DOJ STL.

Mckesson said he was charged with “unusually obstructing the usual use of entrances” of the Department of Justice building.

Meanwhile, here was a portion of Elzie’s experience.

My wrist is legit sore and bruised. I had two STL city police officers arrest me. One held my elbow extremely tight

The other pulled my zip ties back so hard my wrists were bent against them. Simply put, it hurts.

Walking out with bruises and arm hurting from the twist is really fucking me up. I didn't go in there battered or bruised.

Sitting in that cell with the other women and the white women telling us they didn't get searched, zip ties weren't tight..

Also of note is the fact that two reporters—the Washington Post‘s Wesley Lowery and the Huffington Post’s Ryan J. Reilly—were charged with trespassing and interfering with an officer, stemming from an incident in which the two were covering the protests in August 2014 and, while at a McDonald’s to charge their phones and file their stories, were arrested for not evacuating the restaurant quickly enough.

Here was the scene a year ago.

I just called Ferguson police chief to ask about @WesleyLowery and @ryanjreilly, told him what I knew. His response: "Oh, God."

On Monday, seven days before the statute of limitations would have expired, the two were officially charged.

“Charging a reporter with trespassing and interfering with a police officer when he was just doing his job is outrageous,” Martin Baron, executive editor of the Post, said in a statement. “You’d have thought law enforcement authorities would have come to their senses about this incident. Wes Lowery should never have been arrested in the first place. That was an abuse of police authority… This latest action represents contemptible overreaching by prosecutors who seem to have no regard for the role of journalists seeking to cover a major story and following normal practice,”

Lowery has been ordered to appear in St. Louis municipal court Aug. 24, and police said he could be arrested if he doesn’t show up for his hearing. Altogether, though, the news the two received Monday wasn’t entirely bad for Reilly.