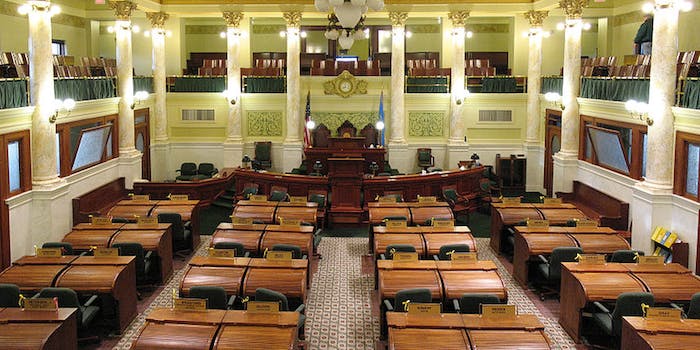 Thomas Lewis, an 18-year-old high school student in South Dakota, has become one of the state’s most prominent activists—all in the space of about a week.

Lewis, a young transgender man, has been speaking out publicly against South Dakota’s new House Bill 1008, which became the first anti-trans “bathroom bill” in the nation to be passed by a state senate on Tuesday. Now, he’s also the face of an ACLU petition asking Gov. Dennis Daugaard to veto the law—a petition that has received nearly 25,000 signatures from supporters across the country since it was launched early Wednesday.

H.B. 1008 would make transgender students use separate restrooms and locker rooms from everyone else – further singling out children who are already at high risk of harassment and isolation. South Dakota lawmakers are sending a message that it’s okay to segregate, humiliate, and bully transgender students.

On Tuesday morning, ACLU attorney Chase Strangio penned an open letter to South Dakota’s legislators, explaining what it’s like to grow up transgender and the message that HB 1008 sends to trans youth.

Last weekend, Senator Omdahl said of transgender young people, “ “I’m sorry if you’re so twisted you don’t know who you are,” but we need a bill to protect other people from you. I keep hearing those words and imagining what it would have been like for fifteen year-old me to hear them. I would have been heartbroken.

The bill was passed that same day, by a 15-20 vote, as BuzzFeed reported. Senate Democrats spoke out against the bill on the floor, arguing that it could lead to a tourism boycott and the federal government pulling funding from the state’s schools.

The bill’s language, while not specifically employing the term “transgender,” mandates that restrooms, locker rooms, and other changing areas in schools be divided according to “the physical condition of being male or female as determined by a person’s chromosomes and anatomy as identified at birth.” That would be in direct conflict with Department of Education’s Title IX policy on transgender students, which says that students have the right to use whatever bathroom corresponds with their gender identity.

The text of HB 1008 even extends to students off campus: When traveling to school-related events (like sports games or theater productions), transgender students would still be forced to use the bathroom that corresponds to their gender at birth, not their gender identity.

Every restroom, locker room, and shower room located in a public elementary or secondary school that is designated for student use and is accessible by multiple students at the same time shall be designated for and used only by students of the same biological sex.

The bill does make room for a “reasonable accommodation” as long as it doesn’t impose undue hardship on the local school district. The accommodations listed in the bill include potential unisex or single-occupancy bathrooms or even the use of faculty showers for trans students when needed and available.

Regardless, trans advocates have roundly condemned the bill. In a statement issued by the Transgender Law Center on Tuesday, Executive Director Kris Hayashi called the bill “a violation of federal law.” Lewis, who has become the face of trans youth in South Dakota as high school graduation looms, added his concerns to the statement as well—saying that HB 1008 “hurts.”

“It makes me feel ashamed to call South Dakota my home. And it makes me feel different, as if I am not human,” said Lewis in the Transgender Law Center statement. “This bill would single out transgender students like me by forcing me to choose between using a different bathroom from the rest of my peers and using a bathroom that doesn’t correspond with my gender identity. This is only going to further bullying, harassment and discrimination.”