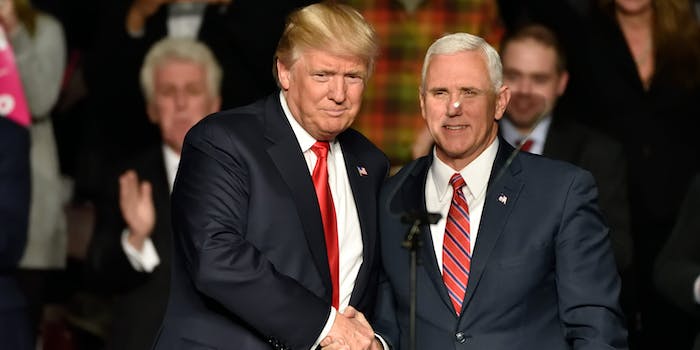 The American Civil Liberties Union on Monday filed a federal lawsuit against the Trump administration’s voter-fraud commission, accusing those involved in the effort of violating transparency law.

The “election integrity” commission, established through an executive order to investigate President Donald Trump‘s false claims that millions of votes were cast illegally in the 2016 election, has drawn criticism for its dubious purpose, its sweeping requests for voter data, its intentions, and its members.

The ACLU lawsuit claims the commission, led by Vice President Mike Pence and Kansas Secretary of State Kris Kobach, violated the Federal Advisory Committee Act, which requires advisory committees to make their meetings public and to provide assurances that they are not acting on behalf of special interests, among other stipulations. Trump, Pence, and the commission itself are named as defendants in the suit.

Although the commission will meet in person for the first time on July 19 in Washington, D.C., its members have held at least one meeting over the phone, which the ACLU claims is against the law.

“The commission held its first meeting without notice or making it open to the public. This process is cloaked in secrecy, raising serious concerns about its credibility and intent,” Theresa Lee, a staff attorney with the ACLU’s Voting Rights Project, said in a statement. “What are they trying to hide?”

ACLU attorney Sophia Lin Lakin accused the commission in a statement of “conducting its work deep in the shadows, making it alarmingly suspect.”

The commission drew widespread condemnation earlier this month after Kobach sent requests to at least 47 states and the District of Columbia for voter data, including names, addresses, last four digits of Social Security numbers, and voting histories. The commission did not disclose how it intended to use that data or how it would keep it secure.

At least 27 states have refused to comply with the commission’s request, and 18 states and the District of Columbia have agreed to only turn over publicly available data. Idaho is currently considering how to respond but state officials said they will not turn over personal data. Montana, West Virginia, and Hawaii said they have not received the request for voter data. West Virginia has indicated that it does not intend to turn over voters’ personal information.

Kobach’s mere presence on the commission raised the hackles of civil liberties advocates due to his history of voter suppression. The ACLU has successfully sued Kobach four times over voter suppression activities.

“First of all, the commission is not to prove or disprove what the President speculated about in January,” Kobach said. “The purpose of the commission is to find facts and put them on the table. Importantly, it’s a bipartisan commission.”

Trump, for his part, attacked the states that have refused the commission’s request, suggesting that they are hiding evidence of voter fraud.