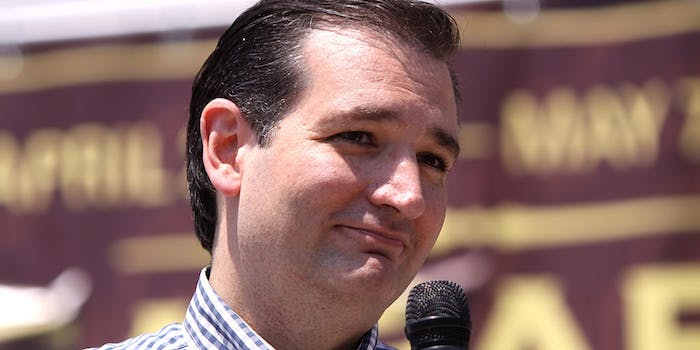 Ted Cruz, the conservative junior senator from Texas, took the biggest risk of his young political career last October when he led a coalition of congressional Republicans to shut down the federal government for 16 days in a last ditch effort to derail implementation of the Affordable Care Act.

Obama stood defiant against his detractors, telling them, “The debate over repealing this law is over. The Affordable Care Act is here to stay.”

Online, the president’s supporters have been much more vocal and gleeful about rubbing in their victory.

On March 24, as the ACA’s open enrollment period drew to a close, Cruz took to Facebook to prompt what he no doubt thought would be a one-sided debate.

“Quick poll: Obamacare was signed into law four years ago yesterday,” the first-term Texas Republican wrote. “Are you better off now than you were then? Comment with YES or NO!”

The people responded, but not with the resounding and overwhelming “NO” Cruz may have been expecting.

“Not only am I better off, but I have friends that are better off,” wrote Facebook user Carol Rietz Gates. “Furthermore, this nation is better off for helping folks avoid the devastation that poor health can bring. Thank you, ACA!”

Gates was the first of more than 57,000 people to respond to the Senator’s poll question. And although there were some comments from users who oppose the ACA and agree with Cruz, supporters of the law were quick to flood the comment thread.

“I’m in the hospital right now, and thanks to Obamacare, my family will not go bankrupt or have to resort to welfare to pay for the three day stay,” wrote Erica McCabe. “Focus on true American issues and leave Obamacare alone!!”

“Much better off,” replied Ellen Mayne. “We’d be even better off if people like you weren’t in the U.S. Senate.”

Catherine Frazier, a spokeswoman for Cruz’s office, dismissed the response to his informal poll. Frazier called the response “manufactured,” noting that a link to senator’s Facebook page had been shared on a pair of liberal websites – Liberals Unite and Democratic Underground.

“This was clearly a manufactured, concerted effort from people on the left making comments days after the original post was put up,” Frazier told Politico. “Probably a better use of their time would be encouraging the administration to build an Obamacare website that actually works.”