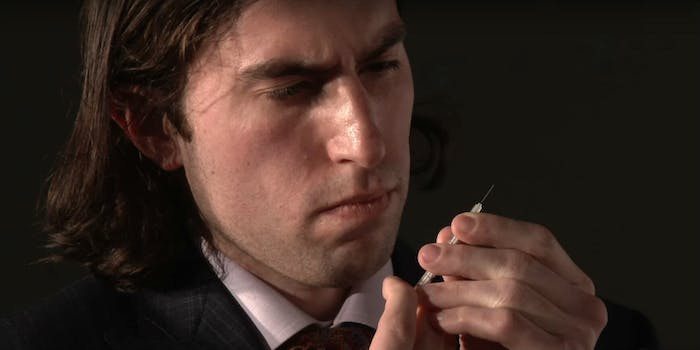 The controversial executive had distanced himself from colleagues.

The biohacking startup CEO who injected himself with an untested herpes treatment in front of a live audience has died. Aaron Traywick, 28, was reportedly found dead in a flotation therapy tank in Washington D.C. earlier this week, police confirmed to VICE News. Authorities are now conducting an investigation but there is no evidence to suggest foul play.

“Traywick’s body was taken to the OCME [Office of the Chief Medical Examiner] for an autopsy. The Metropolitan Police Department is conducting a death investigation,” police spokeswoman Karimah Bilal told GEN.

The controversial figure headed Ascendance Biomedical, a biohacking startup created to make “cutting-edge biomedical technologies available for everyone” by skirting traditional testing protocol. The company made a name for itself by encouraging employees to conduct experiments on themselves.

Ascendance Biomedical made headlines when Traywick, who had no medical background, dropped his pants during a conference session and injected himself with an experimental treatment for herpes. Another employee similarly tested an unproven HIV treatment designed to alter his genetic code. The tests received backlash from the FDA, which was forced to release an advisory against “do it yourself” kits.

Traywick had reportedly distanced himself from the company in recent weeks as disagreements about its direction and guiding principles created a rift. A researcher at the company told VICE it had been four weeks since anyone had heard from the CEO, “We all lost touch with him. It was radio silence,” Andreas Stuermer said.

“Aaron was a passionate visionary. He seemingly never tired as he brought people together to work on some of the most imposing challenges facing humanity,” Tristan Roberts, a colleague at Ascendance Biomedical, told VICE. “While many in the biohacking scene disagreed with his methods, none of them doubted his intentions. He sought nothing short of a revolution in biomedicine; the democratization of science and the opening of the floodgates for global healing.”

The fate of Ascendance Biomedical is unclear, “The future is difficult to predict. He was willing to go where lots of people were afraid to go. I don’t have the perfect answer to this, but stuff will go on,” Stuermer said.