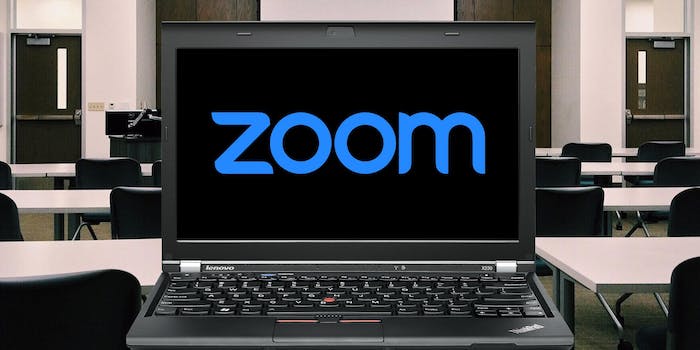 The incident is just the latest example of racially-motivated harassment targeting Zoom meetings.

Harassment campaigns targeted against those participating in Zoom meetings continue to grow as millions across the world rely on the video-conferencing app amid the coronavirus pandemic.

The latest example, spotted by the Counter Extremism Project and first reported by Vice, involves users on 8kun, the site previously known as 8chan, planning a “Zoombombing” against a Jewish school.

Zoombombing refers to the act of joining a Zoom meeting uninvited for the sole purpose of causing disruption. The Daily Dot reported on Wednesday numerous instances in which trolls hurled racial slurs at Black individuals as part of such attacks.

Calls to target the Jewish users, specifically a Zoom meeting held by an academy for Jewish children in Philadelphia, were seen on the far-right forum Tuesday.

A link to the meeting was shared alongside suggestions that users “really freak them out.” Forum members were also encouraged to bring up the “Boogaloo,” Vice notes, a name given to a future race war frequently discussed in far-right circles.

While it remains uncertain whether the harassment campaign actually took place, the FBI was made aware of the posts by the Counter Extremism Project.

The FBI released a warning on Monday urging Zoom users to be aware of such hijackings and take necessary measures to protect their meetings. The federal agency called on users to set their meetings to private and to not share links to them openly.

News of the planned harassment also comes as Zoom faces widespread criticism for security issues that play a part in allowing the attacks to take place. The company announced on Wednesday that it would devote the next 90 days to security in an effort to keep unwanted guests out of meetings.

It was also reported on Wednesday that a Zoom meeting being held by a synagogue in London was flooded with anti-Semitic abuse after dozens of uninvited guests appeared.