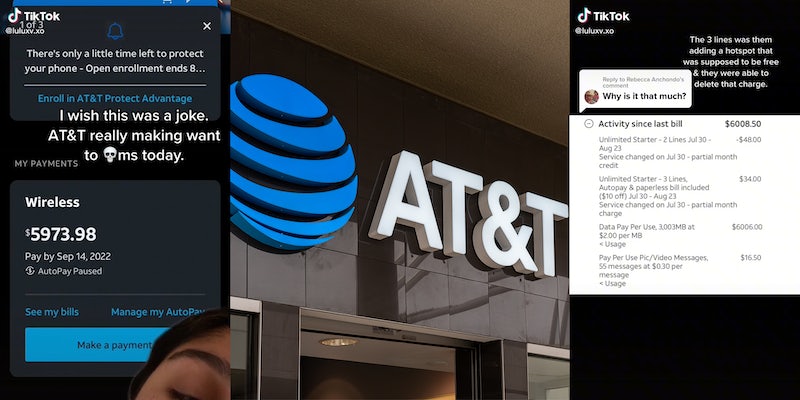 'I spent 1.5 hour on the phone with customer service crying.'

After one month of service on a plan that AT&T calls its “Unlimited Starter” plan, TikToker Lulú (@luluxv.xo) shared on the platform that her bill came out to almost $6,000.

“I wish this was a joke,” she wrote in the text overlaying the video. In the caption, she added, “My whole day is ruined.”

@luluxv.xo My whole day is ruined. I spent an 1.5 hour on the phone with customer service crying. Ive called multiple times in the past few weeks & everyone told me my bill was going to be $120. Idk how this happens. @att #greenscreen #attscam #phonebill #capitalism ♬ Not me starting a TikTok trend purrrrr – Prestonisoverparty

“I spent an 1.5 hour on the phone with customer service crying. Ive called multiple times in the past few weeks & everyone told me my bill was going to be $120,” the caption continued. “Idk how this happens.”

In a follow-up, Lulú shares the breakdown of her bill.

In this video, the majority of the debt comes from “Data Pay Per Use,” in which AT&T charged Lulú $2 per megabyte for 3,003 megabytes. For context, Tech Advisor notes that a YouTube video playing at 1080 pixels uses about 50 megabytes of data per minute.

On its site, AT&T claims that the “Unlimited Starter” plan has “unlimited talk, text & data.” It is unclear why Lulú was charged for data usage or for sending picture and video messages, which is also visible in the bill.

In the follow-up video, Lulú says that she most likely will not have a resolution until Sept. 2 at the earliest. She also says that AT&T claims it is going to file a dispute, though she notes that she has not been able to get anything the representatives said in writing.

“I told them I’m going to keep calling them, because this is ridiculous,” she says. “I just think it’s very unfortunate that we have to jump through all these hoops to get our service.”

“There’s literally nobody we can talk to that can help with this at this moment,” she continues.

Lulú then says that she filed a complaint with the Federal Communications Commission (FCC).

In the comments section, viewers encouraged her to go further.

“File a complaint with BBB someone will contact you from the company asap and fix it,” one user wrote. “This happened to me with a phone line they added.”

“As a Att employee. i would definitely take this to a Corporate store and speak with the manager,” offered another. “A coorperate store should be able to fix all this and like i said if not ask to speak to the District Manager or the Arsmi. And they can fix this…i’ve been with the company for a minute and it’s not a hard fix. Just takes a willing employee.”

Others remarked upon the high prices for out-of-plan data.

“AT&T did the same thing to us,” a commenter recalled. “it was supposed to be a $120 phone bill everything unlimited for 2 lines and it ended up being a little over $500.”

“Yep they been playing with me these last 2 months. I’ve been having credits put on my account,” a second claimed. “Soon as I pay this phone off i’m switching.”

We’ve reached out to both Lulú and AT&T via email.

“We’ve worked with this customer to resolve concerns regarding her wireless account. The bill was adjusted, and she is satisfied,” they wrote.

Lulu elaborated upon this in an email. “This morning I received a phone call from the office of the president at AT&T they received my case as it was escalated over all the buzz,” she wrote. “They were able to clear all the charges including my bill for this month. They even added some bill credits to cover my next month’s bill.”

“In summary, this happened when I transfer my sister’s stand alone line onto my account back in July,” she continued. “I first received what they called the ‘grandfather plan’ pay per usages charges on my July statement. I called to have them fix it because my bill was about $400 then, they gave me a $140 credit & a “free” hot spot. My sister & I had issues with our service off and on this month so anytime I called because we were unable to call or text I asked about my account status. Again, making sure that this pay per use mishap would not happen again. Every time I asked for reps to check they said we were fine and that we had unlimited everything. A few reps even told me to expect my bill to be around $120.”

Much to her dismay, LuLu said she received the $6000 statement on Sunday morning and proceeded to call to clear it up.

“From my phone call with the office of the President today, to paraphrase, it looks like both lines were under unlimited starter but my sister’s line was still being charged per usage, technical or clerical error on AT&T representatives part. I was issued a verbal apology and was told that if I have an issue come up like this again I am free to call the office of the president as soon as possible.”

Lulu says that she is glad her issue is resolved but disappointed by the measures it took to get there.

“I’m glad that this situation has been rectified. Desperate times call for desperate measures,” she said. “I’m so grateful to all the folks that commented and even reached out to me on Instagram wanting to help me out. I’m disappointed to see comments saying that they are going through the same thing with bills ranging from hundreds to thousands of dollars. Something needs to be done to better serve the consumers because life is already hard enough with the state of the world and inflation in this country. I hope the company truly puts better practices in places going forward.”