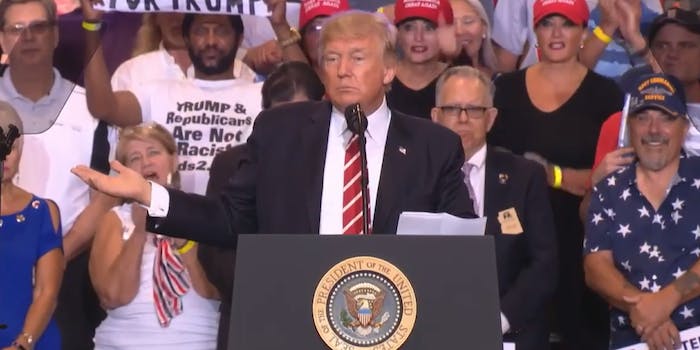 Campaign-style rallies have always been where President Donald Trump appears to be most comfortable – where an adoring crowd hangs on his every word.

Tuesday night was no different. Trump delivered an animated 75-minute speech to a crowd in Phoenix, Arizona, where he bashed the media, defended his response to the violence in Charlottesville, Virginia, and even defended a CNN pundit who was fired for using a Nazi slogan in a tweet.

Here are some of the highlights from Trump’s speech.

Trump said he condemned the “thugs” who caused violence in Charlottesville, but he quickly pivoted to the “dishonest media.”

The president riled up the crowd by blaming the media for reporting on his much-criticized response to the violence, even reading directly from his original statement regarding Charlottesville in an attempt to show he denounced it early.

Trump omitted the most controversial parts of his statements, including the “many sides” portion of his response, which was widely condemned as tacit support for bigotry and hatred.

WATCH: President Trump attacked the media over coverage of his remarks after violence in Charlottesville, Virginia. pic.twitter.com/kCh3IB1uvW

Trump also said the “only people” giving people a platform to spread hatred was the “fake news.”

Continuing his new-found fondness of Confederate statues, Trump lamented the efforts in some parts of the country to take down statues honoring the losing side of the Civil War.

Trump also brought up his comparison of George Washington to Confederate leaders and blamed “weak, weak” leaders for allowing the statues to be taken down.

The border wall feels like a forgotten promise of Trump’s administration with everything that has happened since his election. However, the president clearly hasn’t forgotten—and on Tuesday night, he threatened a government shutdown if he doesn’t get funding for his wall.

“Let me be very clear to Democrats in Congress who oppose the border wall and stand in the way of border security: You are putting all of America’s safety at risk,” he said, later adding that the border security told him a new wall was “vital.”

“We’re gonna get our wall,” Trump said to applause. “Believe me, if we have to close down our government, we are building that wall.”

Republicans control Congress, but here is Trump pledging to shut down the government in order to build the wall. pic.twitter.com/fk0o6geJfC

4) Trump hints at a controversial pardon:

The president drew large cheers from the crowd when he hinted at the possible pardon of Sheriff Joe Arpaio, who was found guilty of criminal contempt of court for not obeying an order to stop detaining people suspected of being undocumented immigrants.

Trump revelled in the ongoing applause when he asked if anyone in the room “liked Sheriff Joe” before he asked if the sheriff was “convicted for doing his job?”

“I’ll make a prediction: I think he’s gonna be just fine, OK?” Trump said, hinting at a presidential pardon. “I won’t do it tonight because I don’t want to cause any controversy. But Sheriff Joe can feel good.”

The media wasn’t the only target Trump had in his crosshairs. The president took aim at Republican Arizona Sens. Jeff Flake and Sen. John McCain. The president and Flake have a contentious history, and McCain was one of the deciding votes that knocked down Republican efforts to repeal and replace the Affordable Care Act earlier this summer.

Flake also felt the fury of Trump, who was clearly animated by the crowd’s reaction.

“Nobody wants me to talk about your other senator,” Trump said, waving his arm. “He’s weak on borders, weak on crime, so I won’t talk about him… Nobody knows who the hell he is.”

6) Trump thinks North Korea is starting to “respect” the U.S.

Trump and North Korea had a week-long war of words earlier this month, with tensions escalating to the point where Guam, the island territory with strategic U.S. military value, sent out a tip-sheet to residents on what to do if there was a missile attack.

During Thursday’s speech, the president seemed to feel vindicated.

“All of a sudden, I don’t know, who knows, but I can tell you, what I said, that’s not strong enough. Some people said it was too strong, it’s not strong enough,” Trump said, alluding to his “fire and fury” response to North Korean aggression. “But Kim Jong-un, I respect the fact that I believe that he is starting to respect us. I respect that very much. … But maybe, probably not, but maybe something positive can come about.”

President Trump on Kim Jong Un: "I respect the fact that — I believe — he is starting to respect us" #PhoenixRally https://t.co/54Ky1FzT2q