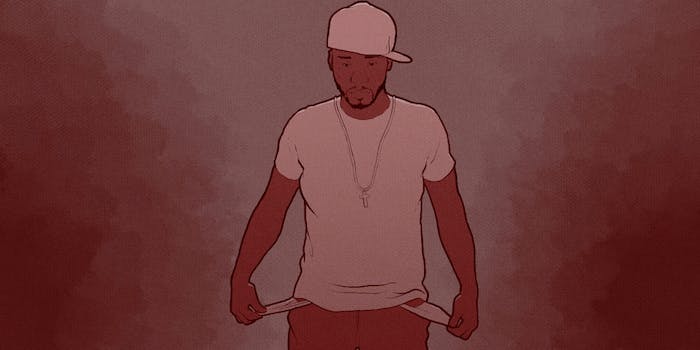 The twisted reason 50 Cent may have filed for bankruptcy

On Friday, a court ordered 50 Cent—real name Curtis Jackson—to pay a $5 million settlement to a woman whose life he nearly ruined after posting a video of her having sex with her ex-boyfriend online without her consent.

50 Cent filed for bankruptcy on Monday, the very morning he’d been ordered to testify about his finances to the court. Some now believe that the multi-millionaire’s bankruptcy could be a scheme to get out of paying his victim.

“This was something done to me. I didn’t have a choice. I would never, ever do this to myself.”

50 Cent has yet to appear in court, despite being asked to testify more than once—and despite the fact that he’s been in New York celebrating his 40th birthday with a series of lavish parties during the trial.

Lastonia Levinston never expected the intimate video she made with her then-boyfriend Maurice Murray to end up online with a mocking narration by a famous rapper. In 2008, according to the Associated Press, 50 Cent got the video from Murray and posted it online in order to taunt his rival Rick Ross (another ex of Levinston’s and father to her child).

“This was something done to me. I didn’t have a choice. I would never, ever do this to myself,” Levinston said in testimony, according to AP.

Paul Wooten, the Manhattan Supreme Court Justice who directed 50 Cent to testify about his finances on Monday, was surprised to find that the rapper had filed for bankruptcy that very morning. His comments were skeptical.

“This is the second such bankruptcy that your client has filed in the last 30 days,” said Wooten to the defense, according to the New York Daily News. Wooten then delayed the case for another week in order to review the possibility of increasing punitive damages.

The bankruptcy was filed in Connecticut, where 50 Cent owns a $10 million, 52-room mansion estate that was featured in a 2012 Oprah special.

The Daily Dot has reached out to Levinston’s attorney, Philip Friedin, for comment but has not yet received a response.

Attorney Carrie Goldberg of the Cyber Civil Rights Initiative told the Daily Dot that it’s unlikely 50 Cent will be able to successfully avoid paying the damages.

“Our bankruptcy laws are written to avoid debt-dodging shenanigans like what 50 Cent is trying to get away with,” Goldberg said, citing the specifics of this bankruptcy-exception law. “Filing for bankruptcy will not discharge debts that stem from the willful and malicious injury by the debtor to another entity.  The intentional distribution of a sexual picture or video depicting another person and without their permission is always going to result in an injury.”