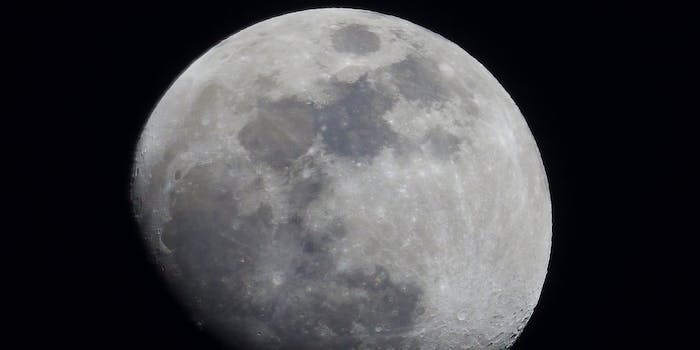 Next year, the moon may get something your grandparents’ house in the country still doesn’t have: 4G network coverage.

The mission of bringing internet connectivity to the moon will be notable for more reasons than just that, however. Funded by Vodafone (which will be providing the 4G network) and Audi, “Mission to the Moon” will mark the first-ever privately funded moon landing. It’ll also be launched from a SpaceX Falcon 9 rocket. Last week, we saw another successful launch from a Falcon 9 rocket: The PAZ mission.

“This is a crucial first step for sustainable exploration of the solar system. In order for humanity to leave the cradle of Earth, we need to develop infrastructures beyond our home planet,” Robert Böhme, founder and CEO of Berlin-based PTScientists, said in a statement. “With Mission to the Moon we will establish and test the first elements of a dedicated communications network on the Moon.”

With 4G connectivity on the moon’s surface, researchers will be able to communicate, transfer data, and access HD video from Audi’s lunar quattro rovers, setting the communications groundwork for future moon missions. The 4G network hardware itself will be the lightest ever developed, weighing less than a bag of sugar. The technology will also be far more efficient than analog radio techniques used in the past.

It will be fascinating to see what new information we can learn from having a high-speed data network setup on the moon’s surface. For the first time, this network will also give us a live HD video stream of what’s happening on the surface of our moon.

The Mission to the Moon will lift off from Cape Canaveral sometime in 2019. Before then, SpaceX plans to send two tourists on a week-long vacation encircling the moon and back, Apollo 13-style. NASA also hopes to make it back to the moon by sometime in the 2020s.

Update 1:52pm CT, March 1: On Thursday, the New York Times made clear that this endeavor isn’t as guaranteed as it sounds. A lot of things have to go right for this network to successfully get off the ground: Development deadlines have to be met, the launch needs to go as planned, and international regulations will need to be addressed. While the project’s timeline may be ambitious, it’s still not a completely impossible feat.