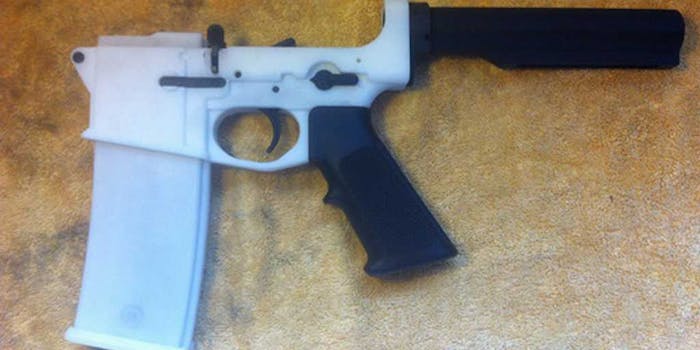 New software will prevent you from accidentally printing a gun

"It works a bit like an antivirus," Create It REAL CEO Jeremie Pierre Gay told Motherboard.

For those who have yearned to dabble in the hot new trend of 3-D printing, but worried they might accidentally throw in a trigger and some bullets and wind up making a firearm can now rest easy. The Danish 3-D-printing firm Create It REAL has got you covered.

The company, which sells 3-D printer component parts and software, recently announced that it has come up with a firearm component detection algorithm that will give 3-D printers the option to block any gun parts. The software compares each component a user is trying to print with a database of potential firearms parts, and shuts down the modeling software if it senses the user is trying to make a gun.

The technology is obviously directed at Defense Distributed, the Texas group that successfully made and demonstrated the first fully 3-D-printed gun. Gay’s efforts is an attempt to diffuse some of the hype—and fears—surrounding DefDist and the rest of the gun-toting 3-D-printing fringe.

“It works a bit like an antivirus,” said Create It REAL CEO Jeremie Pierre Gay, or “a firearm parental control feature” that would prevent users (and children) from accidentally using 3-D weapons files or inadvertently printing out firearms.

For Gay, the concern is not so much about the weapons, but about the potential liability that 3-D-printed firearms pose to 3-D printing manufacturers, particularly as the technology becomes increasingly accessible in the consumer market.

“Even on the best 3-D printers, tolerance [for] a part can be quite different and one firearm out of 10 could explode on use and hurt its user. Or it could work on certain 3-D printers and not on others,” Gay told Motherboard. “Then the users will feel like the manufacturer is the one accountable. [Our] feature removes this risk.”