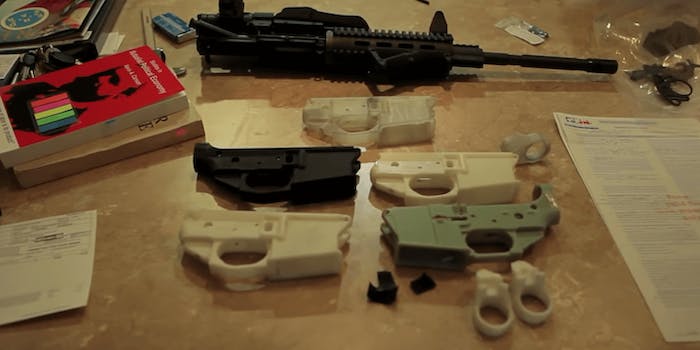 Here's everything you need to know about a 3D-printed gun

The Trump Administration changed who has control over small guns and ammunition exports earlier this year. The federal rule change will relax gun laws that have previously prevented 3D-printed gun blueprints from being available online.

Austin resident Cody Wilson tried to make his blueprints for the first plastic 3D-printed gun available for everyone on his website Defense Distributed in 2013.

After over 20,000 people downloaded the blueprints, the State Department blocked the plans from the internet twice. He’s been fighting to get them back online since.

Now Trump has given control to the Commerce Department, meaning anyone can apply to post 3D-printed gun plans online, according to the Texas Tribune.

It’s a move that will potentially increase the numbers of guns in circulation in the United States.

The Harvard Injury Control Research Center tracks the rate of homicide in relation to gun access. In states with more guns, homicide rates were higher among citizens and police.

As availability extends to anyone with internet access and a low-grade 3D printer, here’s everything you need to know about 3D-printed guns.

What are 3D-printed guns?

3D-printed guns differ from factory manufactured guns because they are assembled in the home.

While there are printers that can print guns out of metal, the first 3D-printed gun was made out of less expensive plastic. Wilson, the 3D-printed gun advocate, named his gun the “Liberator.”

It had a handle attached to a short barrel. One Twitter user thought it looked like a toy.

“I really like the way the first all-plastic 3d printed guns look because they look just like how a 5-year-old would draw a gun,” @frozencuzhag tweeted.

But, regardless of physical appearance the 3D-printed gun shoots just like the real deal. Wilson demonstrates his 3D-printed gun in the following video.

Another key quality is the plastic material 3D-printed guns are made out of. It allows them to go unnoticed by metal detectors in public areas like airports and museums.

However, the Undetectable Firearms Act enforces that the guns cannot be made entirely out of plastic. Instead, there must be a metal firing pin that would set off metal detectors. It’s a part of the gun that can easily be removed and reassembled once through security.

In addition to the different material, homemade 3D-printed guns do not go through the same registration process as some guns do that are made in factories. Each manufactured gun contains a serial number. This allows for the government and law enforcement to track that specific gun when it is registered to an owner at the National Tracing Center.

But, the center isn’t authorized to gather registered serial numbers on a centralized database. A 1986 National Rifle Association-endorsed law prevents the Tracing Center from creating an easily searchable database. Instead, 50 employees manage paperwork that contains the registration of some manufactured guns.

The government uses the information they do have to gather gun statistics while the police can trace a gun used in a crime back to the suspect.

Gun lobbyists are trying to achieve the registration of all guns in the U.S.. However, this task is made difficult by lenient gun laws. That could be exacerbated by 3D-printed guns that do not contain serial numbers.

How are 3D-printed guns made?

It’s challenging to stop anyone from printing a gun who has the means to do so. Along with the online directions, all someone needs is the printer.

3-D printers most commonly use a fused deposition model (FDM), which is essentially a hot glue gun that follows an uploaded plan layer after layer until the product is finished. The printer takes what is on the computer and prints it in 2-D layers until it forms a three-dimensional object.

A printer cannot make a gun in one go. Instead, the assembler must print out each piece and then put it together like a build-your-own toy from the store.

If the gun was printed out in one go, or the pieces did not fit perfectly, the gun would explode with the first pull of the trigger. A successful 3D-printed gun is all dependent on exact assemblage due to the gun being made out of plastic. The weak material is not strong enough to withstand the force of a gunshot if made improperly.

Trump’s law change is not revolutionizing the 3D-printed gun community. While it is legalizing the availability of blueprints, online forums have been anonymously posting blueprints since the Liberator’s debut, according to Wired.

The community, which claims to be globally made up of thousands of users, communicates on Twitter, Signal, IRC, and Discord, according to Wired.

Where are 3D-printed guns legal?

Although the federal government is moving in the direction of legalizing 3D-printed guns, states have stepped in to ban the plastic guns.

Before the bureaucratic switch was made, 18 states and the District of Columbia sued the State Department before it settled Wilson’s case in 2018. The settlement would have allowed his blueprints to become downloadable again.

Some states have even passed laws to ban 3D-printed guns entirely. New York, for example, banned the guns in 2019. New Jersey, Washington, Pennsylvania, and California also have their own legislation to prevent the entire legalization of 3D-printed guns.

Other countries ban the make-it-yourself guns as a whole. Japan, Australia, and Germany have criminalized the use of unregistered guns.

But this did not stop the 2019 Halle Synagogue shooter from using an unregistered 3D-printed gun in Germany.

In addition, it is not entirely necessary to print each piece of the gun. Instead, 3D-printed gun supporters have printed one part and bought the rest of the gun from a seller.

In every gun, there is a designated piece that must be registered to the owner. It’s called the receiver and the Bureau of Alcohol, Tobacco, Firearms and Explosives determines that piece for each gun.

The receivers in some guns, like the AR-15, can be printed. This means anyone can circumvent a background check by printing the one regulated part and buying the rest of the pieces off the shelf.

How is current gun legislation affecting the manufacturing of 3D-printed guns?

In 2018, when the State Department attempted to settle Wilson’s lawsuit, it would have reversed an Obama administration policy.

During Obama’s presidency, Wilson’s blueprints were blocked because they argued that it violated a gun export law. The State Department under Trump attempted to override that explanation to settle Wilson’s case.

Trump weighed in on the debate between the State Department and the states in July 2018.

“I am looking into 3-D Plastic Guns being sold to the public. Already spoke to NRA, doesn’t seem to make much sense!” Trump tweeted.

The tweet wasn’t as clarifying as Trump might have intended. The lawsuit was blocking the free downloadable blueprints for the public to make guns in their homes.

Fast forward to 2020, 3D-printed gun blueprints are making a comeback for the second time under Trump.

The Commerce Department instituted a 45-day waiting period before anyone can apply for a license to post the blueprints online starting on Jan. 23, 2020—the day the rule was changed. That means, barring any additional regulation, people can begin the process of uploading 3D-printed gun blueprints on March 8—which is next Sunday.