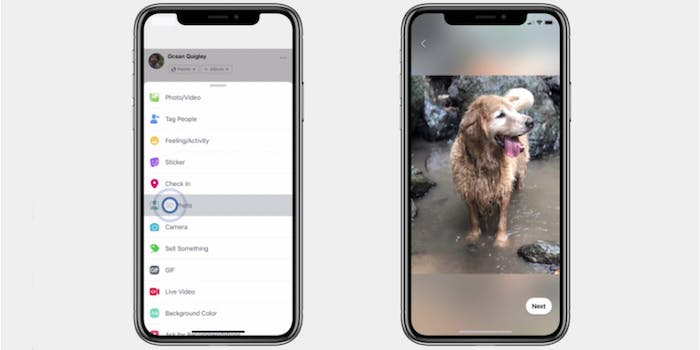 How to use Facebook’s new 3D Photos

It's easy if you have the right equipment.

If you have a Portrait Mode-capable iPhone, you just gained a neat trick on Facebook: the ability to create and edit 3D photos.

The new feature is a little bit like Facebook’s panoramic photo option. When someone uploads a 3D photo, you can tilt or twist your phone to get a 3D effect. That’s thanks to the depth data captured from phones with dual-lenses.

Facebook first announced 3D photos at its F8 developer conference earlier this year, but it started rolling out Friday and will be available as an option to all Facebook users over the next few weeks.

Making a 3D photo on Facebook is easy, as long as you’ve got the right equipment. For now, it’ll only work with photos taken from a phone with Apple’s Portrait Mode, so that’s limited to the iPhone 7 Plus, 8 Plus, X, XS, or XS Max. (It’s possible it could expand to other smartphones in the future, however, as long as they have a dual-lens—which means Google’s Pixel line is out.)

So if you’ve got a 3D photo-capable phone, all you have to do is tap to create a new post on Facebook, then tap the three dot settings icon in the corner. There, select 3D Photo, and it will open the Portraits album on your phone. You can choose a photo to share and preview it first. Then, you can add a caption and share it as you would a normal photo on Facebook.

How to Create 3D Photos

We presented the 3D photos feature and now we're handing the creativity off to you! We can't wait to see what you come up with. If you need a little help getting started, check out our video on how to post a 3D photo. What are you excited to bring to life using this immersive format?

Any Facebook user can see 3D photos in their News Feed. If you own an Oculus Go or Oculus Rift, you can also view these photos in virtual reality, either in the Oculus Browser or in Firefox. Just scroll, pan, or tilt your smartphone or your head (in the case you’re wearing a VR headset) to get the effect.

Facebook has a few suggestions for how to build an interesting 3D image.

The effect will be dramatic if your subject has contrasting coloring to their background. If someone is wearing a white shirt and standing against a white backdrop, the 3D effect won’t be very strong.

For a more interesting 3D scene, think of your composition in terms of layers. Your subject should be 3 to 4 feet away, with perhaps something closer in the foreground, and other objects more distant in the background. This ends up working well because Portrait Mode images shot on iPhone 7 Plus, 8 Plus, X or XS create a depth map that Facebook’s 3D photos use.

Facebook says you’ll get the best results when you incorporate subjects that have “some texture” to them and solid edges. It advises against shiny objects and transparent objects—depth sensors can have trouble with the latter.