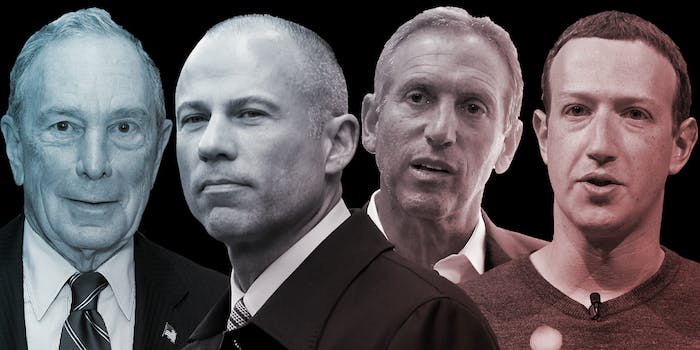 2020 candidates the internet is already exhausted by

The fatigue is real.

With an impressive midterm victory under their belts and few clear political stars in their party, the Democratic nomination for president in 2020 going to be highly coveted and hotly contested. But that doesn’t mean everyone who has thrown their hat in the ring actually has a shot. Some prospective candidates are already overexposed with the Iowa caucuses over a year away.

Their opponent, President Donald Trump didn’t come out of nowhere: he had a constituency. He is the Tea Party movement’s president and his “home state” was Facebook and Twitter. While political novices with big egos may look at Trump and see possibilities, it is undeniable that he was a candidate of a specific time and place. While he galvanized the darkest corners of the right-wing internet, a number of candidates on the left who have tried to use the internet to their advantage have only bored and exhausted their potential fan base.

Here are some Democratic candidates that we can go ahead a write off before they even manage to worm their way onto that first debate stage. Not all publicity is good publicity, especially online, where yesterday’s meme can quickly turn into today’s dead-end candidacy.

No, it won’t be for any particular achievement, it will be because he is a man of this particular moment. In the Trump administration, Burn After Reading has come to feel like a documentary, and a number of clownish Coen Brothers style side characters have populated the national stage and drawn thousands of Twitter rubberneckers. While your favorite might be Paul Manafort or the Krassenstein brothers, spare a thought for Mr. Clean look-alike lawyer to the stars, Michael Avenatti.

The sheer hubris of this man has been on full display since he emerged as Stormy Daniels’ lawyer. It came as no surprise when he announced that he wanted to parlay his high profile legal work into a presidential run. No one was shocked when it was revealed that Avenatti was shopping a TV show with fellow Trump era footnote to a footnote Anthony Scaramucci  We didn’t even blink when we found out he owed a ton of money to the IRS.

This doesn’t mean that Avenatti doesn’t have surprises left in him. His arrest on domestic violence charges this week seemed to mark another unfortunate chapter in the slim tome that will tell the tale of Avenatti’s fifteen minutes of fame. As of Thursday morning, fellow Coen Brothers comedic relief figure Jacob Wohl appears to be involved, and the charges may be fabricated. You can say a lot of things, but you can’t say you saw that one coming.

If Michael Avenatti has a political comparison in recent memory, it is disgraced Illinois governor Rod Blagojevich: Like Blago, Mr. #Basta! is more likely to end up on Dancing with the Stars or in jail than in the White House. Even as he finds himself embroiled in one scandal after another, it appears he will go down tweeting aggro #resistance diatribes at his 900,000 followers until people stop listening or Trump leaves the Oval Office, whatever comes first.

It was already hard to take Mark Zuckerberg seriously.

His 2017 cross-country “listening tour,” which was, in reality, a thinly veiled dry run for a presidential bid, was laughable to anyone outside the Facebook boardroom.

Since Zuck’s year eating patty melts and staring vacantly at corn fields amongst the common folk, things have gotten worse for the Facebook founder. His congressional testimony was widely derided. His company’s handling of its role in electoral meddling and the spread of “fake news” has been a complete failure. In only a few years, Facebook has gone from the essential social media platform to the online home of everyone’s estranged uncle.

It looked like things couldn’t get much worse for Zuckerberg. Then, on Wednesday, the New York Times published a scathing investigation into Facebook’s attempts to weather the post-election storm without taking an ounce of accountability. Facebook’s flailing attempt to salvage their reputation was wide-ranging and devious, involving doling out a patronage job to Chuck Schumer’s daughter, enlisting a member of Pod Save America to spread George Soros conspiracy theories, and smearing competitors with the help of Breitbart and the Washington Free Beacon.

Suffice it to say, things don’t look good for Zuckerberg. Soon, we may be asking how long he can hang onto his company, but we likely won’t be speculating on whether Zuck can make a run at the White House.

Convincing a rich guy you work for as an advisor to run a hopeless presidential campaign is one of the purest grifts imaginable. I salute you, PR industry con artists soaking this guy for untold sums https://t.co/dGOMCcRcpT

We might as well write off the Starbucks CEO and the media mogul mayor in one fell swoop. While Bloomberg has political experience that Schultz lacks, otherwise, these two are essentially the same dull, dispiriting candidate. These are two men that are so rich they have no idea how unpopular their opinions are and who use their wealth to surround themselves with people who will never tell them that they are wrong.

Bloomberg runs a media company that caters to center-right neoliberal sensibilities, and Schultz runs a coffee company that sells center-left neoliberal branding to suburbanites, and these identities are far more popular as brands than ideologies.

Both of these men champion the kind of fiscal conservatism and (relative) social liberalism that was in vogue in the early 90s, but feels hopelessly lame in the era of intersectionality. With healthcare as the leading issue in the midterms and the national recognition (thanks to groups like Black Lives Matter) that “social” issues are more complicated than a diverse latte ad, these men find themselves facing an insurmountable gap in terms of charisma and policy in the quest for the Oval Office.

We can rest assured that these two incredibly wealthy men will spend a lot of money on PR flacks and exploratory committees before they drop out of the race either shortly before or shortly after the Iowa Caucus. At least you can’t say they aren’t job creators.

There is plenty of precedent for losing presidential bids and then taking the White House later on. However, there is no precedent for falling short in a race with a national spotlight and then winning the presidency. Only 14 presidents were not governors or senators before becoming president. Most of those 14 were vice-presidents, cabinet members, or military officers. There is no precedent for a House member who lost a Senate election ascending immediately to the presidency. And regardless of how many self-aggrandizing Medium posts you churn out, if you can’t beat America’s least favorite slug-like senator, you probably can’t win the White House.

Not to bait the right-wing trolls, but Richard Nixon and Hillary Clinton have a lot in common. No, not in terms of secretive scandals, in terms of electoral determination. After serving as Eisenhower’s VP for eight years, Nixon lost the 1960 presidential election to John F. Kennedy. Then he lost the 1962 California governor’s race. Nixon sat out the 1964 presidential election before barely winning the Republican nomination and finally winning the White House in 1968.

Of course, Hillary Clinton is not Richard Nixon. While Nixon spent his years in the wilderness fine-tuning his message and perfecting the racist Southern Strategy that Republicans still use today, Hillary Clinton has spent her time away blaming everyone but herself for her embarrassing defeat.

Her book What Happened? was a massively clumsy attempt at shifting blame, and that was merely a warm-up act. She continues to blame James Comey, Bernie Sanders, the DNC, WikiLeaks, the media, and the Russians to this day. In fact, in October, she compared Russian electoral interference to 9/11.

There is still a lot of bad blood on both sides of the Democratic Party; many voters are still sore from the 2016 primary. The slightest mention of Hillary or Bernie Sanders on Twitter is still enough to spark a massive war of words in the menchies.

However, Bernie Sanders benefits from being the only progressive besides gaffe-prone Liz Warren who appears to be looking into a serious run. By contrast, Hillary Clinton faces a field populated by Sen. Kamala Harris (D-Calif.), Sen. Kirsten Gillibrand (D-N.Y.), Sen. Cory Booker (D-N.J.), and Beto O’Rourke, all of whom are offering a younger, more appealing version of the center-left politics that Hillary couldn’t sell America when the only other option was a fascist red hat and a set of mail-order steaks.

If Hillary weren’t heavily hinting at yet another run at the presidency, you would think she had no interest. She hasn’t gotten behind any fresh progressive causes, offered meaningful reflection on the shortcomings of her previous candidacies, or taken responsibility for losing the White House to a reality show host. At the very least, she could apologize for not campaigning in Michigan.

It is entirely possible that Hillary will run for president again, but you can expect the result to look a lot more like Jeb Bush in 2016 than Richard Nixon in 1968. It’s hard to imagine the Democratic voters going back to Hillary for another round when she makes it so abundantly clear that she doesn’t care about them at all.

If she does run, we can be sure of one thing, the internet will be over it before it even begins.