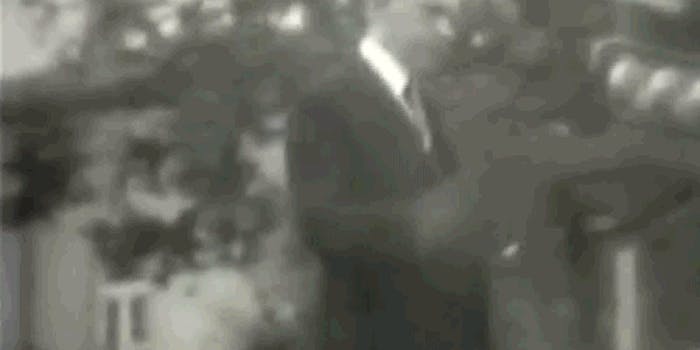 Today, Barack Obama will be sworn into his second term as president of the United States. In honor of his inauguration, we’ve collected GIFs of many of his predecessors taking the Oath of Office, dating back to Calvin Coolidge’s inauguration in 1925.

When President Warren G. Harding unexpectedly died in 1923, then-Vice President Calvin Coolidge assumed the presidency. He beat Democrat John W. Davis in 1924 but did not seek reelection in 1928. In office, the Coolidge administration oversaw some of the country’s most prosperous economic times, now referred to as the Roaring Twenties.

Upon Coolidge’s refusal to seek a second full term in office, Secretary of Commerce Herbert Hoover became the Republicans’ leading candidate. Beating Democratic challenger Alfred E. Smith, Hoover served until 1933, a period that included the stock market crash of 1929 and the start of the Great Depression.

Thanks largely to the economic turmoil that the country faced during his presidency, Herbert Hoover was defeated in 1932 by Democrat Franklin D. Roosevelt. During Roosevelt’s lengthy tenure in office, the country experienced the end of the Great Depression and World War II. After his historic 12-year-long tenure in office, the 22nd Amendment was ratified, limiting presidents to a maximum of two terms. Roosevelt died less than three months into his fourth term and was succeeded by Vice President Harry S. Truman.

In the 1948 election, Truman defeated Republican challenger Thomas Dewey. During his term, the country officially concluded World War II, became involved in the Korean War, and helped begin both the United Nations and NATO; his tenure also saw the kickoff of the decades-long Cold War against Russia and the fear of communism. He declined to seek a second full term.

When Harry S. Truman stepped down, the Democrats nominated his Vice President, Adlai Stevenson, in the 1952 election. Plagued with controversy regarding everything from high-level corruption to the Korean War, Truman’s administration was easily defeated by Dwight D. Eisenhower. The popular “Ike” also won in 1956, again defeating Stevenson. During his time in office, Eisenhower ended the Korean War and oversaw the creation of both the Interstate Highway System and NASA.

Defeating then-Vice President Richard Nixon in 1960, John F. Kennedy became the youngest person to be elected to the Oval Office, at age 43. While he was president, the U.S. advanced in the areas of civil rights and the space program. Kennedy’s only term in office was cut short when he was assassinated in Dallas in 1963.

After his predecessor John F. Kennedy was assassinated, Vice President Lyndon B. Johnson was sworn in as President and carried out the remainder of Kennedy’s first term in office. He defeated Republican challenger Barry Goldwater in 1964, but he opted out a second full term after performing poorly in the New Hampshire primary. Under his administration, the country increased its involvement in the Vietnam War, lifted restrictions on immigrants, and saw the creation of such programs as Medicare under Johnson’s Great Society plan.

Richard Nixon beat Democratic opponent Hubert Humphrey, Lyndon B. Johnson’s vice president, in the 1968 Presidential Election. In 1972, he won a second term in office, beating Democrat George McGovern in a landslide victory. While in office, Nixon strengthened diplomatic relations with China, reduced the country’s involvement in the Vietnam War, and established the Environmental Protection Agency. Due to his direct involvement in the Watergate scandal, Nixon, facing certain impeachment and forced removal, resigned from his seat in 1974, becoming the first (and so far only) president to do so.

Vice President Gerald Ford assumed the presidency upon Nixon’s 1974 resignation. During his time in office, Ford controversially granted a full pardon to his predecessor and also oversaw an official end to the country’s involvement in the Vietnam War.

After defeating incumbent Gerald Ford in 1976, Jimmy Carter served a single term in office before himself being defeated by Republican challenger Ronald Reagan in 1980. The Carter administration saw the United States suffer through a number of crises, including the Iran-Contra scandal and the 1979 energy crisis. Following his tenure, Carter became renowned for his humanitarian work, most notably through Habitat for Humanity.

Former actor Ronald Reagan kept his seat in a major landslide victory in the 1984 election against Democratic challenger Walter Mondale. The Reagan administration implemented a series of new political and economic policies, dubbed “Reaganomics,” and also brought an end to the Cold War against the Soviet Union.

Serving as Ronald Reagan’s vice president throughout his tenure in office, George H. W. Bush won the presidency against Democratic opponent Michael Dukakis in 1988. He lost his seat to Democrat Bill Clinton in 1992. Bush’s tenure in office was marked by the fall of the Berlin Wall in Germany, the dissolution of the Soviet Union, and the U.S. involvement in the Persian Gulf War.

Clinton held onto his seat in the 1996 election against Republican Bob Dole. The first Ppresident from the Baby Boomer generation, Clinton presided over a flourishing economy and budget surplus. His administration also saw the implementation of the “Don’t Ask, Don’t Tell” initiative and the signing of NAFTA. Clinton was impeached in his second term due to perjury and obstruction of justice in the Monica Lewinsky scandal, but he was not removed.

After the extremely close 2000 presidential election, which was not finalized for weeks, George W. Bush defeated former Vice President Al Gore. While Bush was in office, the U.S. entered into the War on Terror in Afghanistan and Iraq, following the September 11, 2001, attacks. The conclusion of Bush’s presidency was marked by an economic recession.

When he defeated Republican opponent John McCain in 2008, Barack Obama became the first African-American to be elected to the presidency. Under Obama, the country ended its involvement in the Iraq War and took steps toward economic recovery and nationalized healthcare. Obama is known for heavily utilizing the Internet as well, having answered questions on social news site Reddit and creating the online petition form We the People.