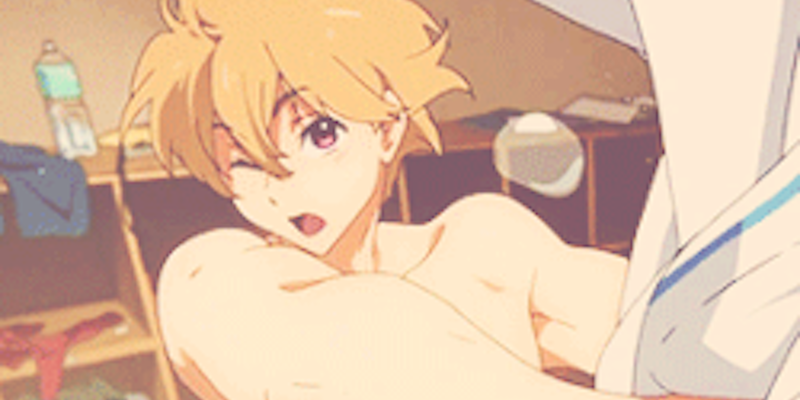 Tumblr fans have created characters, relationships and fanfiction based on "the Swimming Anime." But it's not a real series—it's just a studio's 30-second ad spot.

But now? Tumblr may have just created an entire anime series overnight.

Kyoto Animation, or KyoAni for short, is an anime studio known for its gorgeous animation style and soft-featured female characters, designed to appeal to straight male viewers. KyoAni often does short animated commercials, not promoting any particular anime series, but the studio itself. Here’s a playlist of some of their recent ads.

It was only a matter of time before KyoAni magnanimously decided to do a commercial featuring gorgeous guys instead, if only to give the world a taste of what it’d be like if they pandered to yaoi fangirls—that is, fans of manga showcasing boy-on-boy action.

But they probably didn’t anticipate the result of unleashing a 30-second spot featuring a team of virile young swimmers upon Tumblr.

In the 2 days since the 30-second spot landed on YouTube, Tumblr has been in a frenzy of yearning for what it has dubbed “the swimming anime.”  Tumblr fans have given the nameless boys in the videos character identities and backstories, they’ve picked favorite relationship pairings, drawn fanart, made GIFs, created character roleplaying blogs, confessionals, and Texts from Last Night parodies. They’ve written fanfic.

Want more swimming anime? Here’s a Tumblr theme. Want your swimmers genderswapped? Got that too. There’s also swimming anime cosplay in the works. This parody of the “swimming anime” has over 11,000 notes, while this PowerPoint slide deck on how to ship characters of a nonexistent anime has over 22,000 and counting.

Again, all of this has happened in less than 48 hours.  That’s more buzz than many actual anime series can rustle up.

The official title of the commercial spot, which was announced originally in April of last year, is Ore to omae no sa o oshiete yaru yo, or I’ll tell you what makes us different.  The project was apparently never intended to be more than a studio promo, but that didn’t keep some members of fandom from speculating that it was intended to be an ad for a new series—or from passing around images from the preview.

Although the spot didn’t air until March 6, word around the web has been building ever since the April announcement, especially on Chinese websites. The meme finally seemed to reach critical mass on Tumblr around three weeks ago, when images from the spot were suddenly everywhere. “‘Swimming anime’ gets an award for for having a fandom before it even gets an official name or information,” Tumblr user basicallyfailing said then, in a post which has since racked up more than 8,500 notes.After writing about the phenomenon, anime streaming site Crunchyroll started a Change.org petition to make the series a reality.  But elsewhere on the Internet, not everyone was thrilled.

“I’ve never seen something evolve to such cancerous levels so quickly,” said one 4-chan user. “I don’t think any of us will be able to handle the repercussions if KyoAni decides to cash in.”

So far, there’s no word on whether KyoAni will actually take that step, despite reports that Japanese and other international fangirls are as excited about the new promo as English-speaking fans.

But as Tumblr has long-since taught us, you don’t need a canon—an actual substantial source—for your fandom as long as you have the community to build around it. Sometimes, all you need are the simple words:

Bring on the next fake hit fandom.