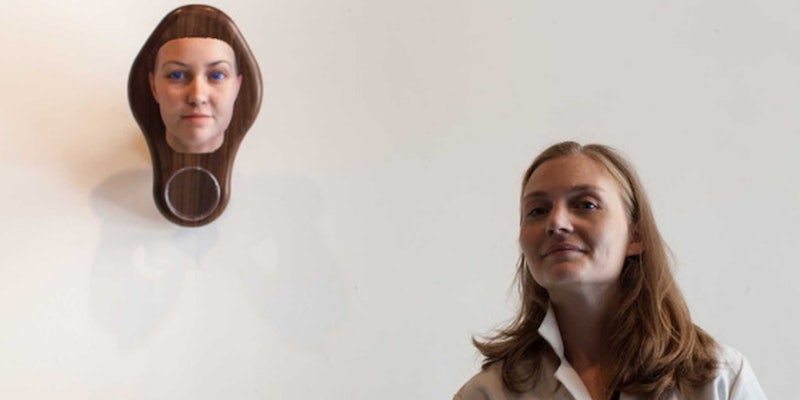 ... or at least a reasonable facsimile. The installation is called Strange Visions.

Hey, remember last week when 3-D printers seemed like a cool novelty and not the harbinger of a lawless dystopian future? Yeah, me neither.

Fresh off the heels of Monday’s news that the first untraceable, 3-D-printable gun had been successfully fired, comes news that human faces can be recreated using advance DNA processing, a stray piece of genetic material and—once again—a 3-D printer.

But this latest development comes from an artist, not an anarchist. New York artist Heather Dewey-Hagborg has pioneered a new medium for creating human portraits in her project “Strange Visions.” Taking pieces of DNA (found in everything from hair to discarded chewing gum), Dewey-Hagborg is able to analyze the genetic code with custom software and recreate a reasonable facsimile of the person’s face using a 3-D printer.

“They have a ‘family resemblance’ to the person,” she says of the finished product. “They will have similar traits and ancestry, but might look more like a possible cousin than a spitting image of the person themselves.”

According to her website, Dewey-Hagborg has always been interested in “exploring the intersection between art and life, between nature and artifice.” But the idea for this particular project came to her while sitting in a therapy session. She couldn’t help but notice a crack in the glass covering a picture on the wall. In that glass she spotted a hair, which led her to pondering all the bits of DNA people leave laying around.

“The project began with me, going about my daily life in the city, and coming across samples of human DNA everywhere I looked,” she said. “Hairs, nails, cigarette butts, chewing gum. We are shedding our DNA all over the place all the time and we don’t even notice.”

It was at this point that Dewey-Hagborg began collecting these “samples.”

Working with biologists at the Genspace lab in Brooklyn and the molecular biology lab at the Rensselaer Polytechnic Institute, she extracted and isolated certain parts of the genetic code in a Polymerase Chain Reaction. The results of these reactions were sent off to another lab that sequenced them and sent back a text file that broke down the sequences into nucleobase codes of As, Ts, Cs and Gs. 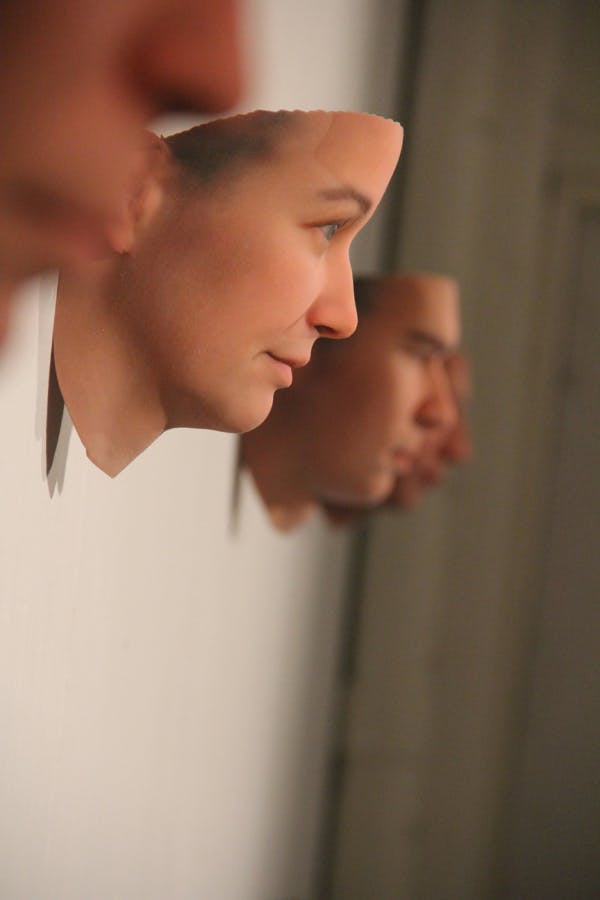 Dewey-Hagborg then entered them into a self-designed computer program that inputed the images into the 3-D printer, creating the finished product. Having tested this same process on people she knows, it’s clear that the result is close but not identical. The sequencing is not perfect and there is no way to account for environmental and behavioral variation.

If this all sounds kind of creepy, well, it should. Dewey-Hagborg created the “Strange Visions” exhibit as a way of bringing attention to the issue of Genetic Surveillance – the collection and cataloging of DNA material by law enforcement officials.

“The possibility of genetic surveillance is the possibility of analyzing these artifacts to extract incredibly personal, intimate information – things you may not even know about yourself,” she writes.

This may sound rather alarmist, but there’s no denying that law enforcement’s pool of genetic data has grown steadily over the year. In 2009, Slate offered up an examination of Genetic Surveillance that noted the expanding dragnet of the U.S. law enforcement’s Combined DNA Index System.

“States began to set up their own databases in the early 1990s, and in 1994 Congress authorized the creation of the National DNA Index System. It launched in 1998 and originally included only nine states. Federal offenders were added two years later. In the beginning, only violent felons went into the federal database; that later expanded to all felons and then to all felony arrestees. Today, the national database includes 178 labs, and the CODIS software is distributed to all 50 states and 44 labs in 30 foreign countries.”

This kind of DNA cataloging is being used more and more often to make arrests rather than simply win convictions. Between 2004 and 2009, more than 70 law enforcement searches in England used “familial searches” of DNA indexes to locate criminals where weren’t even in the system to begin with but had family members who were.

Dewey-Hagborg says this shift in the way law enforcement officials use DNA has gone largely unnoticed by the public (except for its use as a plot device on CBS crime procedurals). But she said the collecting and use of genetic material raises concerns about the not-too-distant future.

“If I have your genome sequence, theoretically I can do more than just know very personal things about you,” she said. “I can clone you. I can impersonate you. It’s a sci-fi scenario but it is a reality now.”