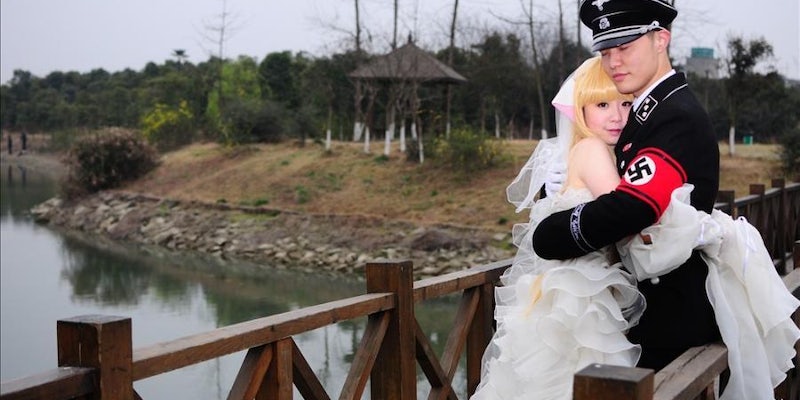 East Asians dressing as Nazis to make a fashion statement face criticism in the West.

In 2005, Britain’s Prince Harry donned a faux Nazi uniform for what the BBC called a “fancy dress party.” The ensuing public and media criticism was so intense the humbled prince was forced to give a public apology.

In the United States and Europe it’s just not a very good idea to don the ornamentation of the Third Reich. Unless you want to send a very specific message, that is: I’m a fascist and antisemitic, and damn proud of it.

But what if you’re country was largely isolated from Hitler’s Germany?

For some in East Asia, Nazi uniforms have become a fashion statement.

One illustration: A young couple recently posted a series of photographs of their Nazi cosplay on popular Chinese web forum Mop (cosplay is short for “costume play”).  In one photo, a man dressed in a SS officer’s uniform is surrounded by two other soldiers, each holding fake guns. The officer is smiling, and holding a German shepherd on a leash.

“My SS military uniform and bridal veil~Everybody, be nice now,” the post was rather innocently titled. It drew over 1,500 comments.

But obsession with Nazi imagery has been going on for a while now in East Asia.

In 2000, Time magazine profiled the growing trend of Nazi-themed bars in South Korea, which it called “troubling” and an “an unthinking fascination with the icons and imagery of the Third Reich.”

Earlier this year, Asia news site AsiaObscura stumbled across some Korean Nazi cosplayers. Why were they dressed that way? The writer wanted to know. As one of the cosplayers told him: “We’re not racist. We just like the fashion. Really.”

In fact, there’s likely little political meaning to the trend. To put things in perspective: In China, the imperial Japanese flag carries connotations similar to the Nazi Sawstika. But that doesn’t stop Americans from emblazoning the flag on T-shirts, shoes, and other pieces of clothing.

Meanwhile, ChinaSmack has translated some select comments from the thread in the Chinese forum. From this admittedly small sample, it certainly appears Chinese are hardly ignorant of the power of Nazi imagery:

“Really at a loss for words that you would even take these kind of photos out and show them off, aren’t you just looking to be yelled at?” wrote one. “Be careful of being struck by lightning!”

“I really don’t know how to describe this couple,” wrote another. “To say you are mentally retarded doesn’t seem appropriate for your age . . . So, in the end I won’t be describing you both but instead wish for you: That the guy will forever remain a virgin, that the girl also forever remain a virgin, that you will be hit by a car when leaving your house, that you will be electrocuted when you bathe, and that for all of your offspring, the boys will from generation to generation forever be slaves, and the girls will from generation to generation forever be whores.”