Jon Millward turns information about  what British men want in their sex workers into an art form.

British men want their prostitutes “slim,” and “nice.” But if they happen to be “lovely” “ladies” with a top of golden locks, well, that’s just fine, too.

That’s the case among men whose reviews were recently analyzed by Jon Millward, a 25-year-old author from England.

In the United Kingdom, in fact, an entire Web culture exists around the rating and reviewing of prostitutes. Prostitution is legal, but solicitation is not, putting the whole business in the kind of legal “gray area”—as Millward calls it—that the Web feels very comfortable filling.

The men who frequent these women call themselves “punters;” the most popular forum for discussing them is called PunterNet.

Millward spent about 40 hours scouring one million words of customer reviews from PunterNet (or as the punters call them “field reports”). Why?

“It’s part of my general interest in the psychology of sex,” Millward told the Daily Dot. “I always want to feel like I have a solid and wide-reaching understanding of sexuality and sexual behaviour and this study into PunterNet was part of that mission.”

The end result was an infographic that became so big on social news site Reddit that Millward’s site received more than 34,000 views in 24 hours. 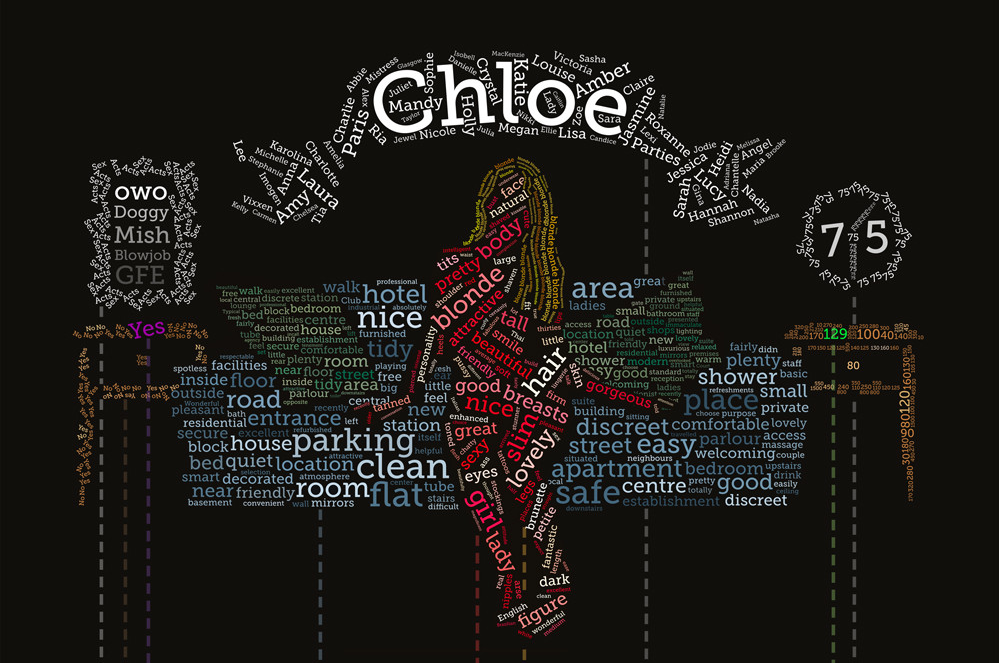 Among his other findings: the most common name for the prostitutes is Chloe (which, as Millward points out, means “fertility goddess”); the average visit clocks in at 75 minutes; 92 percent of the clients would recommend the girls; and the city with the most expensive average rate is Liverpool.

The study falls under the umbrella of Millward’s other work: informational ebooks about seduction and attraction, mostly marketed towards men. Millward says he “bluffed” his way into the publishing industry at the age of 16, and has been writing ever since.

But what does Millward’s study reveal about the culture of sex customers in the UK — both online and off?

That’s we really wanted to know. So we asked Millward. Here’s what he told us (read his own full report on the findings here).

Daily Dot: Can you describe the PunterNet community? Is this a community that looks out for one another (and the escorts too)?

PunterNet, like so many online havens for subcultures, really does feel like a private world. It has its own slang (sex terms) and its own etiquette. Like Reddit, 4chan, or any forum-type site, users are expected to conduct themselves in a certain way.

The relationship between punter and escort is mutually beneficial, so there’s naturally a strong element of respect communicated back and forth between buyer and seller. Even when a guy says awful things about a girl, she’ll usually still reply in a professional way in her rebuttal. PunterNet drives sales to escorts, like a hotel reviews site might, so it’s in the girls’ best interest to represent themselves well.

Like any group of people with the same interests, punters and escorts are bonded, especially so in their case because of the underground nature of their business.

DD: Is there a big picture way to interpret these findings? What does it teach us about British men and the women they pay to have sex with?

Before I got the results and averages collected for the word frequencies, I was interested to see how they’d end up aligning with the classic ideas of what men find sexy/alluring in women. For example, do the men really care about tits and ass? Does personality take a backseat to superficialities? The results pretty much confirmed my expectation: Yes, the men care about the woman’s body and, yeah, they certainly care about her attitude while having sex. That doesn’t mean the reviewers don’t care about the girl’s personality—more like, they’ll compliment her personality (or anything else to do with her) IF the thing in question positively contributes to the guys’ sexual experience.

It’s obviously not possible to draw wide-ranging conclusions about the general male population from things a sub-section of it (punters) do or say, but these men seem to exhibit typical male traits, except magnified by several factors.

DD: Your infographic became a huge hit on social news site Reddit’s r/sex section. What did redditors response teach you about that community?

I always thought reddit would be a good place to start a thread about this article, but I didn’t expect such a massive response. (The link to the infographic has been viewed 33,101 times in a day and a half and I’ve had roughly 6000 unique page views to the article in the same timeframe.)

In terms of their emotional and intellectual response, I think it’s been exactly what you’d expect from redditors, especially those following the r/sex subreddit: liberal, open-minded and interested.

DD: Do you think the world would be a better place if more PunterNets existed?

Countries where prostitution is legal (even regulated) have to be taken seriously. Since 2003 in New Zealand, for example, brothel keeping, living off the proceeds of someone else’s prostitution, and street solicitation are legal. And I haven’t heard of any riots or social implosions happening because of it.

In the UK, prostitution is legal but solicitation isn’t, which to me is a sort of half-measure approach. It’s typical of the British: we love sex, but often aren’t the best at shouting that from the rooftops.

So, to answer your question, I don’t think the world would drastically change if there were more or fewer sites like PunterNet, because human nature is pretty constant and consistent: sex is a dark, primal thing and will always create problems. Maybe, though, bringing it into the light a bit more could help control sex’s more negative social influences.