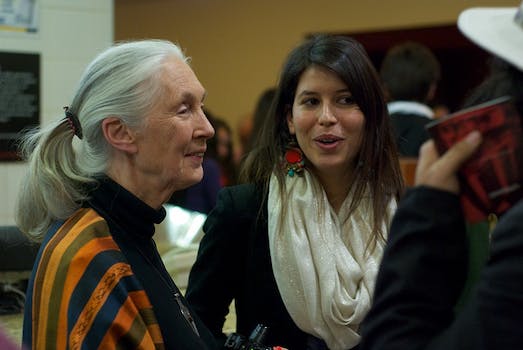 Even the most venerable nonfiction writers can find themselves accused of plagiarism.

In an age when research is easier than ever and entire sentences can be copied and pasted without second thought, even the most venerable nonfiction writers can find themselves accused of plagiarism.

That’s appears to be the case with noted author and naturalist Jane Goodall, who was forced to apologize this week after a Washington Post investigation found Goodall’s latest book contained more than a dozen passages copied from multiple websites, including Wikipedia.

The passages all appear in Goodall’s latest book, Seeds of Hope, which was cowritten by Gail Hudson, a writer and researcher who has contributed to two of Goodall’s other books in the past. The passages in question range from short phrases to whole sentences.

“During extensive research I spoke to as many experts as possible,” writes Goodall in a statement released by the Jane Goodall Institute. “I also visited numerous websites dedicated to celebrating, protecting and preserving the plants of the world. This was a long and well researched book, and I am distressed to discover that some of the excellent and valuable sources were not properly cited, and I want to express my sincere apologies.”

Goodall went on to say she would be correcting the missing citations on her website’s blog and in future publications of the book.

Though most famous for her work studying chimpanzees in their natural habitats, Goodall’s latest book focuses on botany, a subject in which she admits to a lack of formal scientific training. Much of the book is based on Goodall’s personal experiences studying diverse habitats, but the Post says it’s in the book’s expository passages where trouble occurs.

Seeds of Hope contains language from Wikipedia in its discussion of 18th-century Philadelphia botanist John Bartram, who shipped boxes of seeds to Europeans. Goodall writes: ‘Bartram’s Boxes,’ as they came to be known, were regularly sent to Peter Collinson for distribution to a wide list of European clients.

“The Wikipedia entry reads: “Bartram’s Boxes as they then became known, were regularly sent to Peter Collinson every fall for distribution in England to a wide list of clients.”

The Post also found other passages of Goodall’s book that were taken from sites like Choice Organic Teas, Find Your Fate, and this Website on the history of tobacco.

The Post article contains no comment from Goodall’s coauthor, Hudson, and a spokesperson with the Jane Goodall Institute did not answer the Daily Dot’s inquiry about whether it was Goodall or Hudson that bore direct responsibility for the citation errors.

With a lifetime of distinguished work behind her, these stolen passages aren’t likely to permanently tarnish the 78-year-old naturalist’s reputation. After all, she’s hardly the first noted non-fiction author to come under fire for sloppy citations. For although the internet makes it easier to find information, it also means more scrutiny for writers.

CNN host Fareed Zakaria learned that lesson the hard way last year, when bloggers discovered that he’d lifted passages of his Aug. 20 Time magazine column from an earlier New Yorker article by historian Jill Lepore. The plagiarism incident resulted in Zakaria’s brief suspension from Time and CNN, but he ultimately was cleared of any malicious intent after an investigation by all three of his employers.

But other prominent plagiarizers weren’t as lucky. Jonah Lehrer, author and former science writer for The New Yorker, got in trouble last year after it was discovered he’d self-plagiarized several of his previous articles in submissions to The New Yorker. But the real death knell of Lehrer’s career came from blogger Edward Champion, who discovered that Lehrer had fabricated quotes by Bob Dylan in his bestselling book Imagine: How Creativity Works. These revelations forced Lehrer to resign from The New Yorker and both Imagine and his earlier book How We Decide have been pulled from shelves by their publisher.