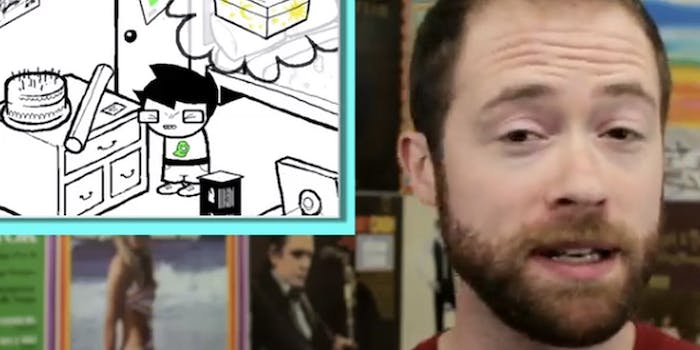 Is Homestuck the “Ulysses” of the Internet?

PBS's Idea Channel considers the possibility that the length and complexity of the webcomic sensation Homestuck puts it on par with James Joyce's best work.

Homestuck, a vast and complex multimedia webcomic, is two years old and has a cult following of at least a million loyal fans. But it’s only now beginning to seep into mainstream culture.

Mike Rugnetta, the host of PBS’s Idea Channel, has a hypothesis. Much in the way that James Joyce’s impenetrable novel, Ulysses, has inspired a crazy few to tackle it because it’s hard, Homestuck is the longest, most challenging text the Internet has delivered thus far.

Homestuck and Ulysses present similar challenges to readers. They each have walls of text that seem disproportionate to what they aspire to describe—Homestuck’s epic plot is 5,000 pages, unfinished, while Ulysses employs 265,000 words to describe a single day. Both have confusing plot elements—Homestuck welcomes hundreds of characters; Ulysses introduces a lexicon full of words that don’t exist.

“In in its own weird way, Homestuck is a lot like James Joyce’s Ulysses, where only the strongest, most dedicated readers make it through to the end,” Rugnetta wrote. “Most people don’t expect such expansive and daunting works to find a home on the internet, but Homestuck has done it, illustrating that its followers’ time and effort may actually enhance rather than lessen their devotion.”

It’s a psychological phenomenon called Effort Justification, in which people feel the biggest payoff after completing a task they consider to be extremely difficult. That payoff happens whether it’s after running a marathon, slogging through an impossible novel, or staying up to date on a complex comic with text, GIF, video game, and animation barriers to the finish line.

Just like when it tackled brony fandom, Idea Channel focuses on the reasons fans embrace their fandoms over the what. This video won’t shed any light on what exactly Homestuck is, but it’ll explain why its followers are so highly devout.