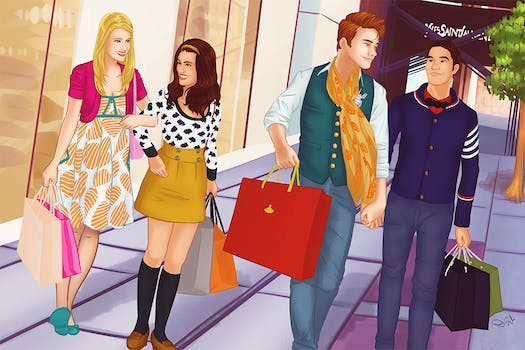 Fan fashion of TV, from “Glee” to “Gossip Girl”

Tumblr blogs like Fashion of Glee track down and catalog the outfits worn on popular TV shows.

“Well I made most of them, and searched the internet for bargains, and that half-sweater there at the bottom, that belonged to my dead aunt. I found it in her attic.”

So explains Kurt Hummel, Glee’s fashion-forward star, on a recent episode of the show when finally confronted with just how he acquires all the high-fashion looks on a Lima, Ohio, high school budget. Of course, at the same time, die-hard fans were giggling because they knew that sweater couldn’t possibly be stashed in an attic; it was actually a men’s asymmetrical sweater from Acne made in 2011, a fact uncovered by Fashion of Glee, a Tumblr devoted to unearthing and cataloging the many outfits worn by the the cast of the hit Fox show.

“One of the things that’s really cool about TV is so many people are telling the story: the writers, the directors, the actors, the costumers, the set dressers,” says Racheline, a fan who often puts forth Glee analysis on her blog. “Just like in real life, we make assumptions about people based on what they wear — are they like us? Are they wealthy? Are they vain? Are they comfortable with their bodies? Do they respect social conventions? Are they trying to show off who they are, or trying to hide something about themselves? Costume is always a huge part of the story — whether we’re talking about fiction or not.”

“Fashion Of” blogs are an important piece in the puzzle of fan costume analysis. They tend to focus on teen television like Glee, Gossip Girl, or Pretty Little Liars — the type of shows that appeal to the denizens of Tumblr and rely on current fashion trends and designers to fill their wardrobes. Alice, the Australian fan who started Fashion of Glee two years ago when she was 16, was inspired to do so because she was frustrated with her local shopping scene, became an avid online shopper, and started noticing Glee pieces in her searches. Her first find, a Glee competition dress, was posted to her personal blog. “It got such a great response, I ran with it,” she says, honing her skills with extremely specific Googling that gave way to intuition about the characters’ general styles and brand affinities.

Fans use of these blogs are multifold. For some it’s a shopping destination, a way to fill out their wardrobes with TV-inspired pieces — an effective end result in television as lifestyle marketing. Several fans interviewed admitting to turning to Fashion Of blogs in search of particular outfits from their favorite cast members, or at least as a mode of internet window shopping to covet the high-end and out-of-reach items. Another common use is as background for fan works, from fan art to fan fiction. Grace, a fan who is working on her first piece of Glee fan fiction, says she’s using Fashion of Glee as a reference point. “I’ve been researching the stories told by the clothes Blaine wears in an effort to tell a multi-dimensional story in this fic or provide ideas to readers about what stories are being told,” she says. “It’s weird, I recognize, but i think that I appreciate the almost-covert nature of storytelling by clothes, and I’m interested in seeing if I can tell a story using both words and clothes via words alone.”

Fans also engage in meta-analysis — the taking of a variety of inputs form the canon text of a series, including the fashion, and making inferences about characters and plotlines. These metas take various forms, from one-off interpretations of single outfits, color palates, or accessories, to woven theories that pull together trends across episodes or an entire series. Glee is particularly ripe for this sort of deconstruction, especially in a universe with so many key players; often, background interactions and outfit choice are the only moments fans have to witness certain characters and derive theories. “You can tell a lot from the clothes the characters wear, and the costume department of Glee is genius,” says Leigh, an avid Fashion of Glee follower. “I’ve written some things about Rachel’s wardrobe, mainly, and how that relates to her ideas of sexuality and maturity. I’ve also written things about Quinn and her portrayal of femininity.”

What do the actual costume departments of shows think of all this theorizing and attention to their selections? Alice says Fashion of Glee will occasionally contact Glee costume designer Elizabeth Martucci with small questions, but stresses they act totally independently of Fox and Glee. Fans may be churning out meta and fiction that references these supposed costume-driven insights, but is there any truth to the speculation according to the show’s designers?

When faced with some of the meta fans develop based on costuming, Martucci says it’s a mixed bag whether choices were intentional by the costume department, or not. For example, after Kurt Hummel started wearing red handkerchiefs with several outfits, fans wondered if this was a cheeky nod to the gay men’s hanky code used primarily in the 1970s to signal in-group affiliation and desires. Martucci says no: This was only fashion and not a hidden message (although she did reveal that there are some hidden jokes in Glee outfits.)

On the other hand, there’s some validity to attention fans pay to Kurt’s jewelry that evokes images of death and loss. “The skulls, trophy animals, beetles, etc. that we have selected for Kurt are not directly related to the death of his mother,” says Martucci, noting that they do however reflect some of the loss he has experienced. “They are also a nod to the transformative nature of death. Despite the challenges he has experienced in life, or perhaps because of it, he has a strong sense of self, resilience, and hope.” Other theories, like the use of color theory to inform characters’ outfits choices, are on point with what the costume department is doing — using colors to represent emotions and tell story arcs visually with respect to each individual character. “We do not follow a universal code of color significance,” Martucci says. “The meaning of color differs slightly for each character affected by the color palette they dress within. For some characters, the emotional story is told more by shade than hue.”

Of course, a confirmation or a denial from the powers that be in TV costuming doesn’t diminish fan theories. Recently, Blaine’s character was seen sporting a vest from the women’s department, which provided another piece of meta-evidence for fans who analyze his gender presentation on the show. The costume department may not cop to an underlying message in that particular choice. “A vest is a great vest, regardless of what part of the store is comes from,” says Martucci. “Everyone has a balance of masculine and feminine traits. The underlying story is learning to be comfortable with who we are and not being restricted by labels.” But that doesn’t stop fans from reaching their own conclusions.

“Stories aren’t static,” says Racheline. “People are always going to see patterns and implications in things the creators didn’t intend. All audiences do it, whether we’re talking about casual viewers, hardcore fans, or academics. I’ve always believed that the truth of stories exists in this unknowable place that’s somewhere between what the creators produce and what the audience sees. I’m just doing my part in helping the story to take shape from my place out here in the audience. What’s cool about Internet fandom is that that process can happen in public, and sometimes on a large scale.