A claim that the Statue of Liberty's face was originally "dark" has been circulating on Facebook, but it turns out to be a Snopes-certified hoax.

Hundreds of Facebook users have read the shocking claims about the Statue of Liberty: she was originally a black woman, meant to illustrate the Great Emancipation, but the U.S. refused and made France recast her as a white woman!

It’s a well-sourced claim: the New York Times Magazine wrote about it in May 1986, photos from the statue’s early days show that her face was originally “dark,” and author Jim Haskins wrote in his book The Journey of the Songhai People that the statue’s inspiration was “the part that Black soldiers played in the ending of Black African Bondage in the United States.”

“This is how you’re supposed to present information,” wrote Clarence McCall. “With lots of sources.”

Unfortunately for those who think the claim is true, though, each of those sources has been thoroughly debunked.

The late Dr. Haskins, for instance, wrote a refutation himself. In an archived post, he noted:

I have written one, 48-page book for children on the statue: The Statue of Liberty: America’s Proud Lady. I have never written a book entitled The Journey of the Songhai People. I have also never stated that the statue was presented by the people of France to the people of the United States to honor the role of black soldiers in the Civil War.

As for the other so-called sources: the New York Times Magazine did indeed run an issue full of articles about Lady Liberty in May 1986. As Snopes noted, however, “None of them said anything even remotely supportive of the claims made here.”

And the model’s supposedly dark face? It’s a simple oxidation process. The Statue is made of copper, which naturally turned from a bronze color, to deep black, to the green we know today, as anyone who knows copper would have predicted.

“This a damned lie,” noted Kia Marie. “Photo shopping should be illegal.” 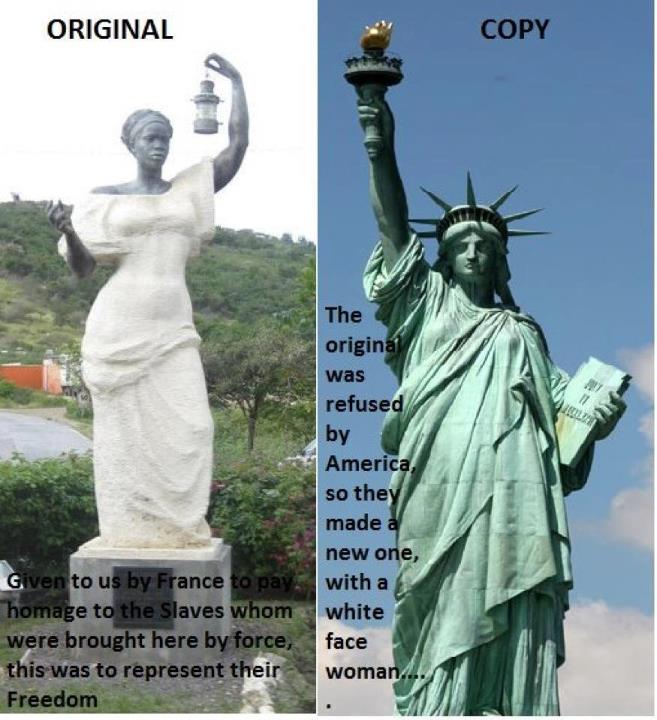