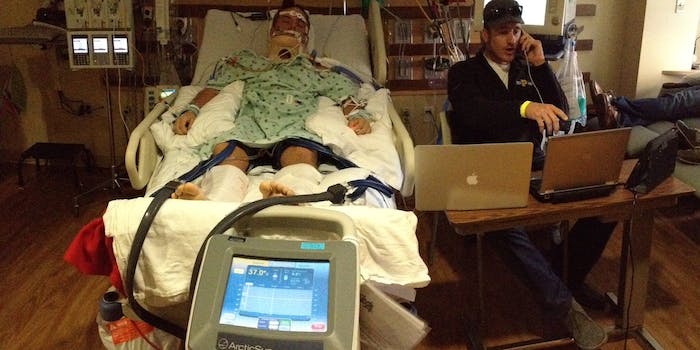 Jason Schonhoft has been tracking his brother's recovery from a medically induced coma on a benefit site and through inspiring video animations.

On the Saturday before Halloween, Jason “JT” Schonhoft received an early morning phone call from his sister. Their brother Jake, 22, had injured his head falling down some concrete stairs at Purdue University and had been taken to the hospital. He was in a medically induced coma.

“I was really upset, scared and worried,” Schonhoft told the Daily Dot. “But at the same time I knew I needed to get home. I knew he was going to be OK. He is a tough kid. He’s been through tragedies before and accidents when he was younger.”

Schonhoft, 26, traveled from Minnesota to Indiana to be by his brother’s side. Unsure of how his family was going to pay for Jake’s treatment, hospital stay, and rehabilitation with no insurance, Schonhoft created WakeJake.com. The site allows people to learn about the accident, read condition updates, and donate money.

While at the hospital, Schonhoft also started playing with Cinemagram, an iPhone app that allows users to seamlessly turn mundane scenes like a fan blowing into smooth GIFs. Factyle-produced program collects 100,000 animations daily and has attracted a strong celebrity following.

Then a wonderful thing happened five days ago while Schonhoft was using the app. Jake woke up.

“My brother, when he first started moving and coming out of the coma, he moved his arms a little,” Schonhoft recalled.

“The first GIF I made, he reached for my sisters face and I caught it on camera and made it into a cinemagram. I thought it was a cool way to share his progress.”

Since then, Schonhoft has captured almost every memorable wink, smile, and laugh Jake has made using Cinemagram.

One of Schonhoft’s most popular animations features Jake laughing while a group of nurses looks on, smiling. To date, Schonhoft has raised about $25,000 to help pay for his brother’s hospital bills.

“There’s still a lot of progress to be made,” Schonhoft said. “I keep showing him all the videos and cinemagrams. We’re trying to build his memory from before the accident.”

It’s a beautiful awakening, captured one GIF at a time.

All GIFs and images by Jason Schonhoft