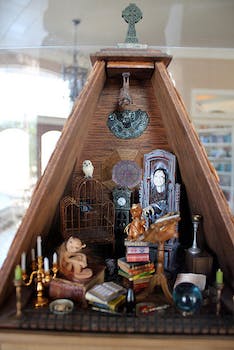 We knew she was funny and talented with words. But now Jenny Lawson shows us she's a lot more than that.

Jenny Lawson, aka The Bloggess, is best known being one of the world’s most widely read bloggers, for her irreverent humor and for being prone to locking herself in the bathroom during panic attacks.

What she’s not known for: building dollhouses.

Just when Lawson had been pegged simply as a mommy blogger and humor writer, she surprised 150,000 Twitter followers late last night with a hidden talent.

“Still awake? Want to see the dollhouse I’ve been building for the last 10 years?” she wrote.

A link lead to a Flickr collection called Haunted Dollhouse, full of intricate spooky details. The miniature architecture includes a spiral staircase, a secret passage, tiny hand-cut tarot cards (“This is probably why I have arthritis,” Lawson quipped), and a minute skeletal hand.

Last year, Lawson had casually mentioned building a horror themed dollhouse. (She’d also mentioned it in more detail in a 2006 post.) However, late yesterday was the first time she shared photos.

The reception was positive, to say the least. The image collection received 8,000 views in less than twelve hours.

“How are you this awesome?” one commenter asked. “You have no idea how awesome this is to me,” said another.

“And this is why I love the Internet,” Lawson tweeted after sharing. “Validation for 10 years spent on something that no sane person would ever build.”