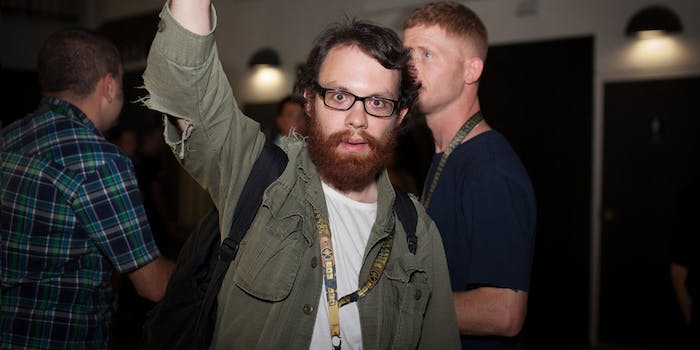 Hacker Weev’s attorney: The FBI is intercepting my client’s mail

The FBI is intercepting the prison correspondence of infamous Internet troll Andrew “weev” Auernheimer, including letters from his defense team, according to his attorney.

“He’s sent me between 10 and 20 letters in the last month or two. I’ve received one,” Tor Ekeland, who had just returned from visiting Auernheimer at the federal corrections institute in Allenwood, Pa., told the Daily Dot in a video interview.

Last March, Auernheimer was convicted of accessing a computer without authorization and sentenced to 41 months in prison. As a member of the computer security team Goatse Security, Auernheimer discovered a major security flaw in AT&T’s network, which allowed him to download the email addresses of some 114,000 iPad users. Goatse Security reported the flaw to Gawker and provided journalists with the information, who then published it in redacted form.

“He’s been interrogated by FBI agents who’ve asked him questions about the contents of an attorney letter that he sent to me,” he said. In other words, “the FBI is reading Weev’s and my correspondence.”

Ekeland said he tries to make the 3.5 hour trip to visit Auernheimer as often as possible, especially now that his client is isolated from the prison’s general population in a Security Housing Unit (The SHU). He characterized the prison’s treatment of his client as psychological torture.

At the federal appellate court in Philadelphia last Wednesday, Defense Attorney Orin Kerr said that AT&T’s data was acquired by Goatse when they visited a publicly accessible webpage, not by hacking or obtaining unauthorized access. Therefore, Kerr argued, the group had not committed a computer crime as defined by the Computer Fraud and Abuse Act under which Auernheimer was charged.

After full audio of the Auernheimer hearing was posted to SoundCloud by Internet Journalist Matthew Keys, Assistant US Attorney Glenn Moramarco was mocked online and in the press for admitting to the court that he didn’t understand Auernheimer’s crime.

“I’m flabbergasted that this could be called anything other than a hack. He had to downloaded the entire iOS system on his computer. He had to decrypt it. He had to do all sorts of things—I don’t even understand what they are,” he told the judge.

For an unknown purpose, FBI agents visited Ekeland’s law office while he was attending the appeal. He responded to the agency via Twitter:

FBI just visited our office. Sorry guys, I’m in Philly for weev’s appeal. Give u a ring when I get back.