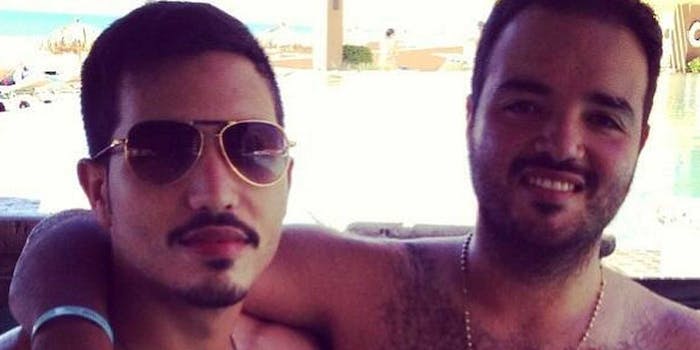 What good is a life of outlandish luxury, military-grade firearms, and premium intoxicants if you can’t brag about it? That’s the question raised by the social media feeds of several young men born into Mexico’s most powerful cartel families, few of whom show any restraint when it comes to splashing details of their criminal wealth and power all over the Internet.

In looking at a Twitter account maintained by 23-year-old Serafin Zambada Ortiz, son of wanted Sinaloa cartel No. 2 Ismael Zambada, you might not see anything unusual right away. But keep scrolling and you’ll find that photos of Bentleys and bottles of Moët soon give way to shots of marijuana, gold-plated assault weapons, cash being weighed on a scale, and peeved-looking pet cheetahs.

Ortiz’s publicly available Facebook photos, meanwhile, depict mostly arsenals, more money, and attractive young companions. Above the law as he seems online, he was detained last week when trying to cross the border into Arizona on foot, having already been indicted in the U.S. for trafficking methamphetamines and cocaine.

Often tagged in Ortiz’s posts are buddies Alfredo Guzmán, son of Sinola boss Joaquin “El Chapo” Guzmán Loera, and “El Chino Antrax,” the apparent alias of a cartel soldier who describes himself as the “Sinaloan Scarface, fanatical about guns and 100 (percent) with the Zambadas,” according to McClatchy DC—with the appended comment “I’ll see you in hell.” Guzmán at one point went so far as to post a photo of a dead man: “It said the victim tried to pass himself off as part of the Guzmán clan and paid the price.”

He also issued a stark warning along with a photo of paramilitary troops on a desert road: “For those who step onto foreign soil, my active armed commando.”

Despite reports that El Chapo cautioned his men not to make cartel activities public—a Guzmán tweet showed a small airplane on a grassy private strip, for example—there even seems to be an unofficial Twitter feed for the Sinola cartel itself. As ever, ostentatious guns and large exotic cats are perpetual motifs, though the Photoshop job on that tiger in the convertible is pretty shoddy. Perhaps this is more of an aspirational account?

Taking to Twitter to air your dirty laundry, to say nothing of your laundered money, hardly seems the behavior of a tactful narco prince. But when you’re raised in a syndicate grown beyond having to answer for their crimes, the delusion of total invincibility is pretty hard to shake.