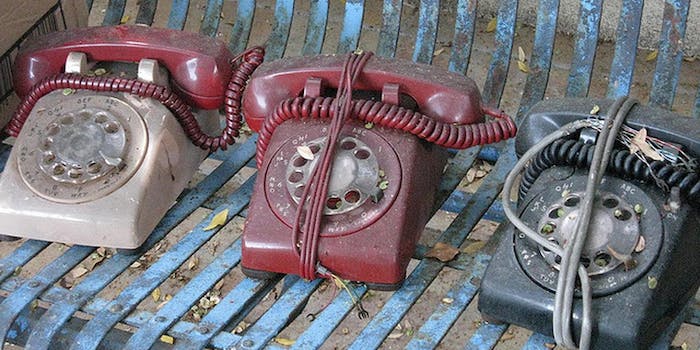 One ring to fool them all, and in phone charges bind them.

For many tech-savvy email users, it’s easy to ignore the mysterious and scammy messages that fill their inboxes. But is the same true of missed calls?

The perpetrators behind a new scam making the rounds are betting that their victims can’t avoid the temptation of calling back an unknown, unanswered caller. And that’s the point.

According to the Better Business Bureau, the so-called “One Ring Scam” is on the rise.

The way this con works is by using a computer to mass dial phone customers for a brief second and then hanging up (after the eponymous one ring). It’s just long enough so that a missed call notification will show up on the target’s cell phone, but not long enough for the target to answer and leave the scammer on the hook for long-distance charges.

With that, the trap is baited. Inevitably a few of the thousands of would-be victims call the number back (perhaps it looks familiar, or they’re waiting for an important call from someone who isn’t in their contacts). When they do, they are connected to a paid international chat line. The victims of the scam are charged an $19.95 international call fee and billed per minute by the service—sometimes at a rate as high as $9.

According to the BBB, the calls are typically originating outside the United States from places like Antigua or Barbuda (268 area code), the Dominican Republic (809), Jamaica (876), the British Virgin Islands (284) and Grenada (473). Carrying out the scam from these countries has an advantage for the con artists. These foreign countries have the same country code as the U.S., +1, which makes the numbers look more legitimate.

As TechCrunch notes, this scam bears some similarity to earlier cons. Several years ago, a common ploy was for scammers to pose as international medical professionals or law enforcement officers and text someone claiming that a relative had been hurt and that they were seeking an emergency contact. Again, the point of this scam was to dupe people into calling a costly international line.

“But this is the first time I’ve seen them boil it down to a simple missed call,” TechCrunch’s Greg Kumparak writes. “It plays on the ubiquity of smartphones, and that… no one really calls each other anymore. If someone is calling, it’s probably important, right? Better call’em back!”

Even if you aren’t immediately charged, there are still other reasons not to call back a suspicious number. Much like responding to spam email, it’s an indication to the scammer that they’ve hit upon an active number. It’s more incentive to keep calling and to attempt possible phishing scams.

The best advice to avoid becoming a victim is to simply not return calls to suspicious numbers. If you must, its best to Google the number first. The BBB also advises keeping close tabs on phone bills to dispute any unauthorized charges.