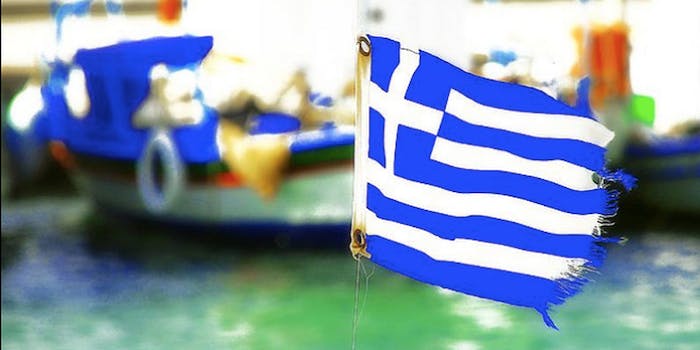 Greek man given 10 months in prison for ‘blasphemous’ Facebook page

He experimented with Facebook virality, and now he's doing time for it.

Facebook is increasingly used as evidence in courts across the globe, and you can add yet another story to the growing list. This week a Greek man was sentenced to 10 months in prisn for a “blasphemous” Facebook account.

The man, Filippos Loizos, 28, was arrested in 2012 for creating a Facebook page which parodied a dead Orthodox monk, Father Paisios, as a pasta dish using a Greek play on words. Paisios died in 1994. He was revered by some as a prophet, and though blasphemy charges aren’t commonly filed in Greece, the Athens court did not accept Loizos’ appeal for less jail time.

The arrest came after Greece’s far right party petitioned for it because a satirical story on the man’s page was linked to by several media outlets as real. Christos Pappas, a politician from the far-right Golden Dawn party, spearheaded the campaign for Loizos’ arrest.

Loizos says he wrote the story as an experiment in virality. He wanted to see which religious and conservative sites would repost the article as fact, and when several did they called for his arrest.

The experiment, which intended to show how stories become twisted and unreliable in the new media age, particularly with the help of religious and far right-leaning websites, succeeded. On social media, many Grecians protested the arrest, but this week, after a failed appeal, Loizos was sentenced to 10 months in jail.

The case is especially absurd because the Greek government has just brought charges against members of the Golden Dawn party, including Pappas, for engaging in criminal activity. Today, the news of Loizos’ sentencing has caused Greeks on social media to once again pick up the fight for Loizos’ freedom.

In 2014, Filippos Loizos was found guilty of #blasphemy. Not in Saudi Arabia but in Greece, which now holds the presidency of the EU. #shame

The monk “insulted” by Filippos Loizos died 20 years ago. Charges were brought after demand by Golden Dawn MP.