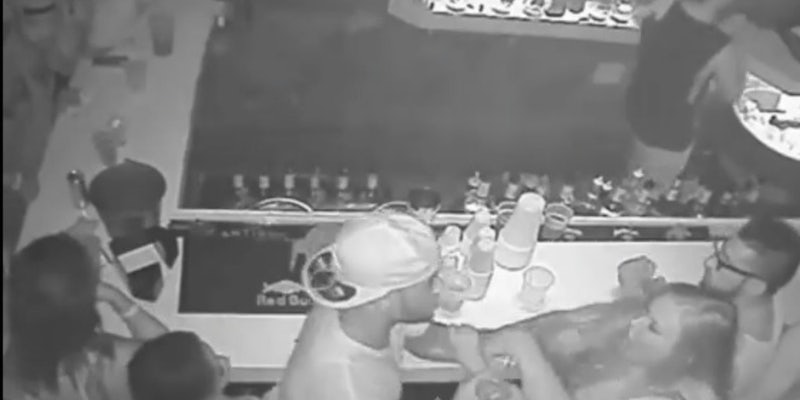 When Heisman Trophy winner and No. 1 overall NFL draft pick Jameis Winston was accused of sexual assault in 2012, the Tallahassee, Florida, police department and the state’s law enforcement officials in general were roundly criticized for how poorly they handled the case.

But now that another Florida State quarterback is accused of assaulting a woman, the State Attorney Office has released surveillance video of what appears to show De’Andre Johnson punching a woman in the face at a Tallahassee bar.

Here’s the video, via the Tallahassee Democrat.

Johnson, 19, was charged with battery late last month after allegedly striking the woman at Yianni’s Nightclub at about 11:30pm ET on June 24.

Police said the woman was ordering a drink at the bar when Johnson appeared to try force his way past her. The two, who apparently didn’t know each other, argued, and the woman cocked her fist. Then, Johnson appeared to grab her, not letting her go even though she raised her knee to his midsection and then threw a punch at him.

After Johnson allegedly struck her, police said she had a bruised left eye, a swollen cheek and swollen upper lip, and a small cut on her nose.

Unlike Winston, Johnson isn’t expected to be a star this season. According to the Democrat, Johnson was expected to be the third- or fourth-string quarterback for 2015. After this video was released Monday, it seems highly unlikely that Johnson will ever take the field for the Seminoles.

Update 9:22pm CT, July 6: Johnson has been dismissed from the Seminoles football team, the school announced Monday night.
From the school’s statement: “Florida State head football coach Jimbo Fisher announced Monday evening that freshman De’Andre Johnson has been dismissed from the football team effective immediately. Johnson was indefinitely suspended on June 25 following initial reports of an incident that occurred off campus and resulted in a criminal charge.”