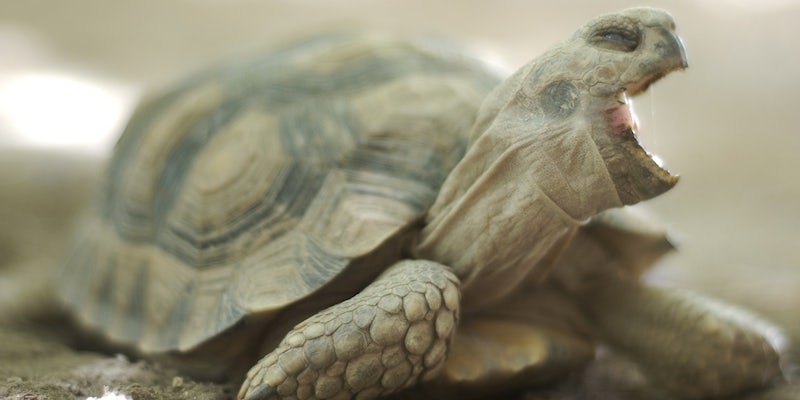 This is as low as it gets.

Two North Florida girls are in hot water—off- and online—after torturing a rare gopher tortoise and sharing the footage online.

The teens, as catalogued in graphic and disturbing videos they posted to YouTube and Facebook, attempted to burn the turtle multiple times. Unsatisfied, they threw it against the hard pavement multiple times, taunted it, and ultimately stomped it to death, all the while laughing and delighting in its suffering.

In posting the videos online, however, the girls only assisted in the Internet’s attempts at serving up vigilante justice for the gopher tortoise, who was listed as a threatend species in Florida in 2007. Earlier this week, 4chan’s /b/ board commenced with a doxing effort—doxing refers to the public release of private, identifying information—dubbed “Operation Shell Shock.” 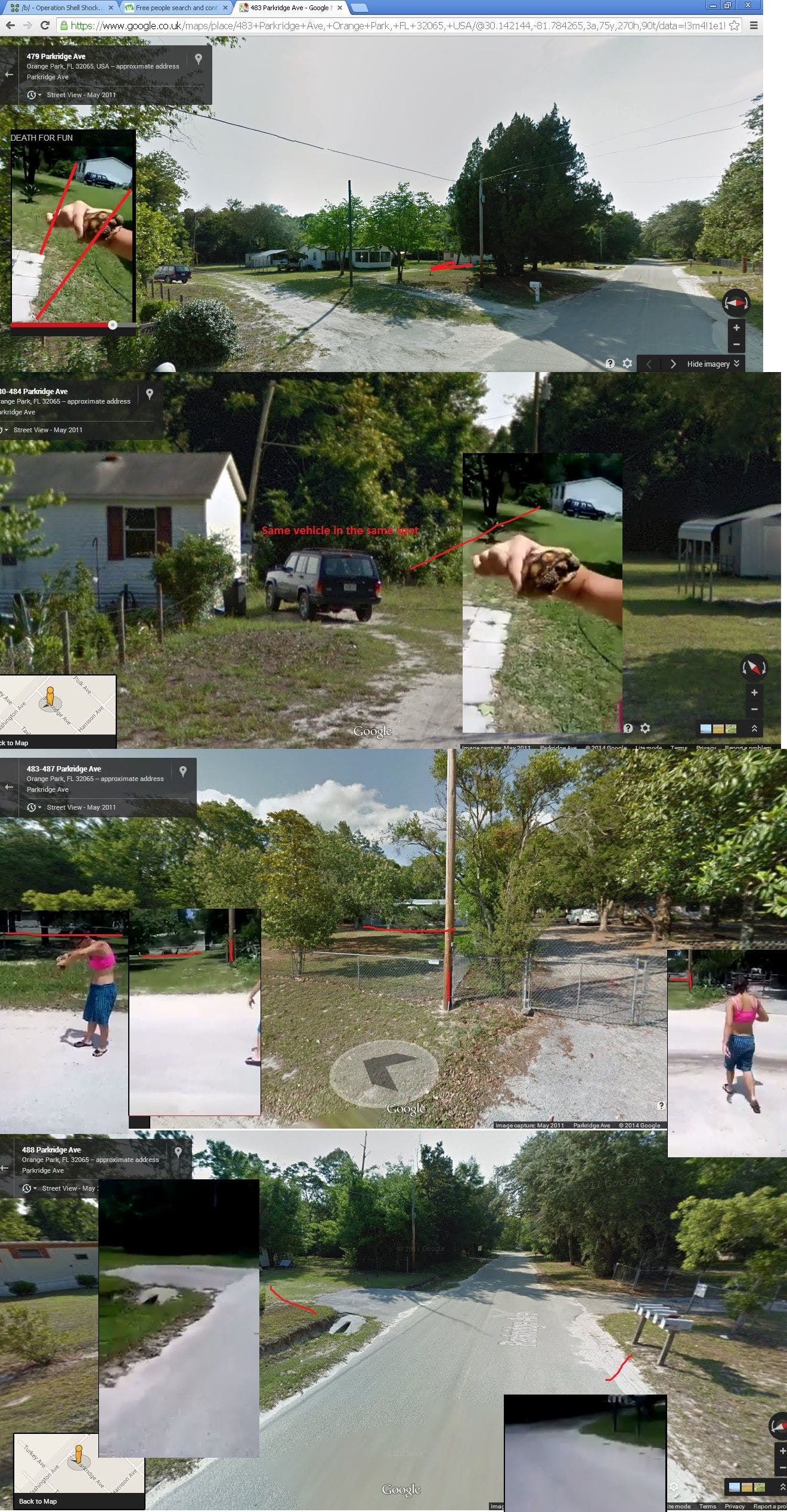 Using stills from the videos, the /b/ board members were able to gelocate the address that the video was filmed at and the supposed home of one of the girls. After an exhaustive combing of social media, members began sending out email blasts to local media outlets, as well as Ridgeview High School, detailing the girls’ actions and their supposed identities. The Florida Times-Union, while unable to confirm the identities of the girls, aged
15 and 18, has confirmed through friends and local law enforcement that the two are indeed students at the Orange Park, Fla., high school. 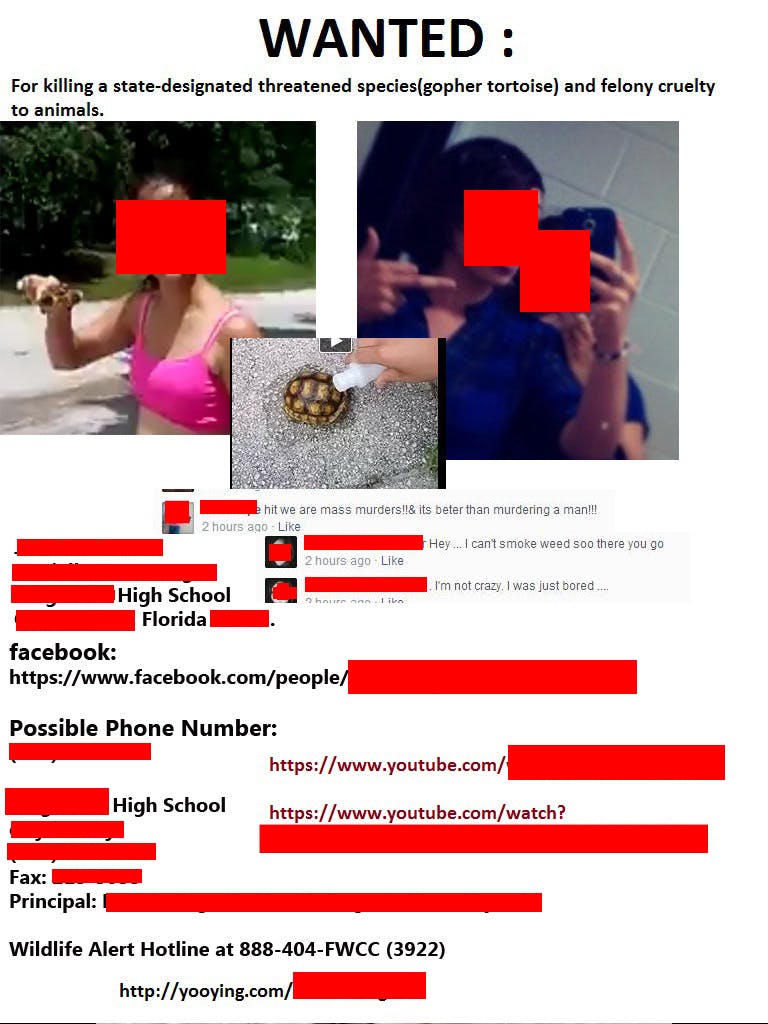 After being alerted to the videos by a Las Vegas Animal Control officer, Nevada Voters for Animals President Gina Greisen joined in the quest for the girls to face justice. Campaiging on Facebook, the animal right’s group posted both original videos with pleas for its members to report the actions of the teens to the Clay County sheriff’s office.

The group’s Facebook page applauds a teen named Ash for bringing the videos to their attention. According to a GoFundMe.com page set up by the teen to raise money for the Wildlife Foundation of Florida, he claims he was friends with one of the girls in the videos and downloaded the videos off her profile before they were deleted. According to Ash’s fundraising site, the girls had taken the tortoise in as a pet after finding the endangered animal but “got bored, (and) they took it outside and tortured it.”

After receiving multiple complaints about the torture and killing of the tortoise, the girls are currently under investigation. Karen Parker, a spokeswoman for the Florida Fish and Wildlife Conservation Commission is working with the State Attorney’s Office to determine the charges that the girls could face. Parker told The Florida Times-Union:

“We received quite a few complaints about this and a call from the Sheriff’s Office, so we had an officer go out last night. Everybody is pretty much sickened by it and can’t believe someone would do that to an innocent animal.”

The girls could face multiple felony charges. One for aggrevated animal cruelty, and an additional felony charge for the death of an endagered species. With the girls delighting in the animals abuse, yelling “Burn baby, burn baby,” as the animal tries to escape the flames, many are hoping to see them tried as adults.

Despite its notorious reputation, 4chan’s attempts at serving up justice for defensless turtle is just one of the group’s acts of animal goodwill. Previously, the /b/ board members have come to the aid of a French cat brutally abused on video and a dog who had a gun held to its head by a high schooler. In August, /b/ also got a teenager arrested for kicking a kitten on Vine.