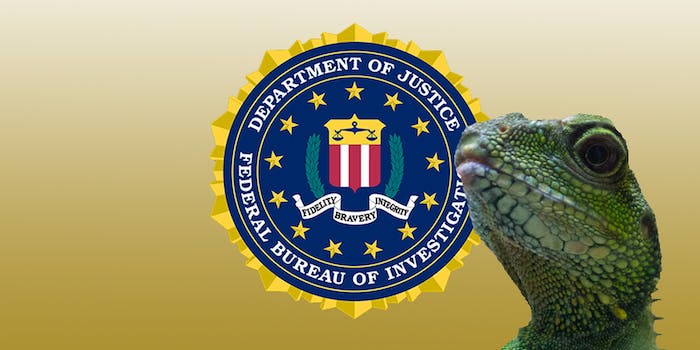 The FBI is actively investigating a member of the hacker collective that claimed responsibility for recent high-profile cyberattacks on Microsoft and Sony properties, according to multiple sources with knowledge of the investigation and the attacks.

A member of the Lizard Squad hacking group, who goes by the alias “ryanc” or Ryan, allegedly garnered the attention of a special agent with the Federal Bureau of Investigation after speaking with the media about Lizard Squad’s Christmas-day attacks on Xbox Live and the PlayStation Network (PSN).

Ryan is said to be 16 or 17 years old and lives in Finland, according to sources who spoke to the Daily Dot. The sources requested anonymity, fearing backlash from Ryan and the FBI. Ryan refused to confirm his age or other personal details with the Daily Dot.

Due to Ryan’s alleged age and country of residence, it may be difficult for U.S. law enforcement to extradite Ryan for his alleged role in the attacks.

Lizard Squad took down Xbox Live and PSN on Dec. 25, causing outages that lasted over 24 hours for some gamers. The group’s attacks have dominated headlines worldwide, and the Lizard Squad Twitter account has ballooned to more than 125,000 followers since the attacks.

Lizard Squad used a common attack known as “distributed denial of service,” or DDoS, to shut down Xbox Live and PSN. DDoS floods a network with more traffic than it can handle, rendering it inaccessible to genuine users. The attack is considered to be unsophisticated and can be carried out using widely available software.

Ryan confirmed to the Daily Dot that it was him on Sky News. Some speculated that the person interviewed on the show was not a member of Lizard Squad.

“I look like I have cancer. I got that short haircut in prison,” Ryan told the Daily Dot. “That, plus a black shirt and a shit camera, didn’t play out well.”

The FBI special agent said to be assigned to the Lizard Squad case did not respond to multiple email requests for comment. The agent also refused to speak to the Daily Dot during a phone call.

Ryan, who has formerly gone by the aliases “zee” and “zeekill,” says he is not concerned about the FBI’s investigation. They will not apprehend him, he says, at least while he remains in Finland—and he may be right. Finnish citizens have a right to refuse extradition to other countries. Finland also reserves the right to refuse extradition due to a suspect’s age, and can stipulate that Finnish citizens may not be prosecuted even if they are extradited.

Ryan also claims to be protected by the International Covenant on Civil and Political Rights, a 1966 treaty adopted by the United Nations General Assembly that emboldens certain civil rights for citizens of signatory countries. The U.S., which ratified the treaty in 1992, does not necessarily view the Covenant as legally binding. It is unclear how the treaty would factor into potential legal action against Ryan.

Finnish law enforcement authorities may still pursue action against Ryan for Lizard Squad’s attacks on Xbox Live and PSN. Polisi, the police of Finland, were not immediately available for comment.

Ryan told the Daily Dot he spent three months in a maximum security prison in Finland earlier this year, after he allegedly made a bomb threat to American Airlines. President of Sony Online Entertainment John Smedley was aboard the flight threatened by Ryan through Lizard Squad’s Twitter account.

Despite his willingness to speak to members of the media and appear for on-camera interviews, Ryan says he actively works to keep his identity unknown. “I don’t have any accurate personal information out there, and I’d like to keep it that way,” he says.

This is not Ryan’s first brush with the FBI. In 2013, Ryan says he and a friend ordered hot wings and pizza using stolen credit cards at the Rio hotel in Las Vegas, while they were attending the annual Defcon hacker conference. Shortly after placing their order, six armed law enforcement officers and two FBI agents raided the hotel room, a source with knowledge of the encounter told the Daily Dot. Ryan claims the FBI raided the hotel room because they suspected him to be behind “thousands of hacks.” Ryan says he was never detained, but a source familiar with the raid disputes that claim saying Ryan posted bond and fled home to Finland.

The family of the FBI agent assigned to Ryan’s case has allegedly been on the receiving end of “swatting” attacks. Ryan allegedly called law enforcement claiming that he was a family member of the special agent, saying he just killed someone and had multiple hostages, according to sources, one of which has direct knowledge of the investigations. The call allegedly resulted in a heavily armored SWAT team raiding the home of the agent’s family member.

For now, Ryan remains in Finland, where he continues to participate in Lizard Squad activities.

Ed. note: Due to the alleged age of the Lizard Squad member said to be under investigation by the FBI, as well as potential safety concerns, we have removed Ryan’s legal name from this report.