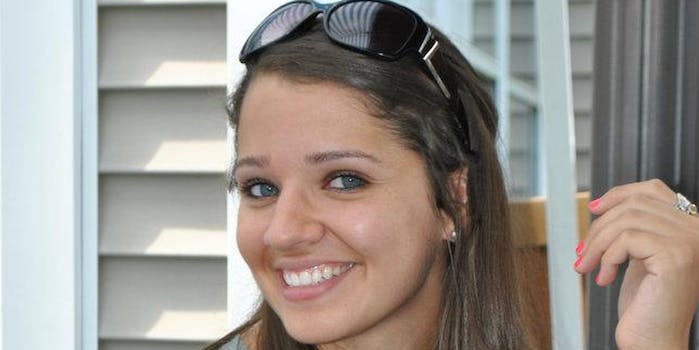 Fake Twitter accounts are spreading Sandy Hook conspiracies, and this family is fighting back.

Perhaps the only thing worse than losing a loved one in a violent, senseless tragedy is to see their name abused and dragged through the mud after the fact.

Sadly, that’s what the family of Victoria Soto, a first-grade teacher who was killed during the Sandy Hook massacre back in 2012, has been forced to endure. For some time now, the 27-year-old, who was killed in the mass shooting alongside five of her colleagues and 20 children, has been the subject of fake Twitter accounts that seek to spread Sandy Hook conspiracy theories and harass the slain school teacher’s family.

But now, Soto’s family is attempting to end this abuse in a rather unique way.

According to Victoria’s sister Jillian Soto, the family has applied to trademark Victoria’s name. If successful, a trademark could make it easier to have Twitter takedown fraudulent accounts. But whether they will be able to legally trademark the name is uncertain.

Jillian Soto told the Associated Press that most of the fake social media accounts that have been created in the two years since the massacre are for the express purpose of spreading conspiracy theories about Sandy Hook.

According to official police reports, 20-year-old Adam Lanza murdered his mother on the morning of Dec. 14, 2012, before storming his former elementary school in Newtown, Conn., with multiple firearms and carrying out the deadliest school shooting in U.S. history.

The killing sparked a major debate in the U.S. about gun control, especially after it became clear that Lanza was able to get his hands on firearms despite a history of mental and behavioral disorders. Because of this, a number of conspiracy theories have suggested that Sandy Hook was a hoax, or otherwise orchestrated by the U.S. government as a ruse to enact gun control legislation. These people persist in the belief, propagated online with the hashtag #SandyHoax, despite that fact that no new gun restrictions have actually been enacted by the federal government since the shooting.

But by continuing to promote conspiracy theories online, Jillian Soto said that Sandy Hook “truthers” are inflicting emotional anguish on her family and diminishing the actions of her sister who helped hide students during the attack.

“Vicki did a heroic thing, there are 11 kids that are alive today because of the actions of my sister,” she said. “And we don’t need anything negative to be tied to her name any longer.”

Though trademarking her name won’t prevent the spread of conspiracy blogs or websites, it would give Victoria’s family a way to keep her name from being misappropriated on Twitter and to prevent interference with online fundraising efforts for the Vicki Soto Memorial Fund, a scholarship fund set up in Victoria’s honor.

Right now, the family routinely has Twitter accounts taken down that claim to be Victoria, but this process can be time-consuming as Twitter must investigate each claim for abuse. But Jillian Soto said a trademark would shorten the process.

“Now we can say, ‘Look they can’t use this name, it has to come down right now,’” she said.

The trademark application was filed on Monday, but it’s unclear if the Sotos will be successful. It is possible to trademark a person’s name, in fact celebrities do it all the time, according to Seattle attorney Beth Hutchens writing for IPWatchdog. But they must fulfill several specific requirements that Soto may not be able to meet.

According to Hutchens, to obtain a trademark for a person’s name, that name must be unique to the point where it is most commonly associated with that person. The name also has to be associated with some sort of commercial activity.

“A person’s name has to be so distinctive that the consuming public automatically thinks of a particular person when hearing that name, not just a person with that name,” Hutchens writes. “You show this by providing evidence of what is called ‘secondary meaning.’ Secondary meaning means that even though the word is descriptive (like an adjective or a name), people don’t think of the adjective or name as a descriptor, they think of YOU.”