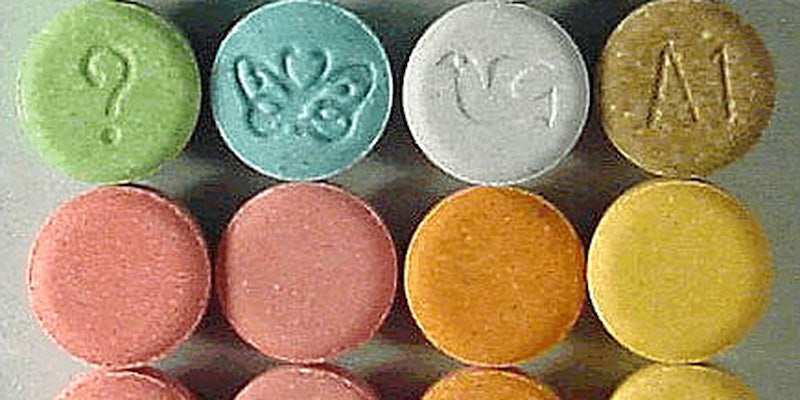 The most popular drug on the Deep Web is a $9 ecstasy pill from the Netherlands known as “Superman Xtc.”

Sold by a pseudonymous business known as the “Chemical Brothers,” the pill won the honor from a new survey of the Silk Road 2.0 black market that measured, among other metrics, the feedback and reviews each product received. The Superman Xtc notched up a 4.9498 rating (out of 5) with 438 reviews.

The Netherlands has been called the ecstasy capital of the world, so it’s no surprise that it’s shipping an awful lot of the drug around the globe.

The Dutch were recently involved in the arrests of five prominent Deep Web drug dealers.

The second most popular product on on the Silk Road isn’t even a drug. Instead, it’s a £100 Tesco Voucher card, sold to customers who want an easy way to convert the digital currency Bitcoin to British Pounds. The card can be spent all over Great Britain at pubs, restaurants, tourist attractions, and more.

Third on the list is 200 milligrams of high quality DMT (Dimethyltryptamine), a psychedelic that has rapidly been gaining popularity across the United States in recent years, and now has more than 1.4 million American users.

The survey measured popularity by number and quality of reviews. Many sales go without reviews, so it’s impossible by design to measure everything sold on Silk Road. It’s also possible that drugs like ecstasy, which produces euphoria and empathy among other effects, can drive its smiling users to leave more positive reviews than other drugs.

If a customer smokes a ton of great weed, perhaps they won’t have the drive to write a positive review, preferring instead to use precious energy for chewing Doritos. We excitedly await a peer-reviewed research paper on the subject.

Common wisdom says that marijuana, a much more popular drug than ecstasy or DMT, would be near the top of the list for Silk Road popularity. In reality, the first weed featured (“3.5 grams of STINKY BUD” from the United Kingdom) comes in at number 13 on the list. Cocaine, ketamine, speed, and Xanax all feature higher.

There are plenty of possible explanations here. First, marijuana is more plentiful, meaning buyers have more options. It’s harder for a single product to dominate the weed industry than it is to dominate the DMT industry.

Second, it’s simply easier to find weed in real life. As one of the most commonly used drugs in the Western world, it’s often easier to reach out to a real life drug dealer than to go through Silk Road to find something as simple as pot.

But it’s not always easy for everyone to obtain good “STINKY BUD” from a neighbor, so rest assured knowing marijuana still sells very well on Silk Road.