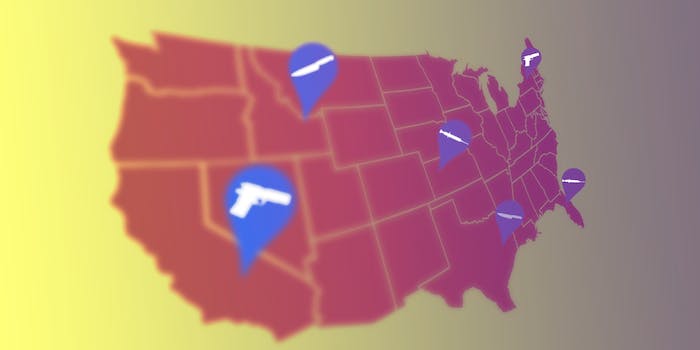 Craigslist can be a dangerous place.

Everyone knows that Craigslist is a magnet for crime.

The ubiquitous listing site is the tenth most-highly trafficked website in the United States and has been the go-to place for people looking for everything from used lawn furniture to no-questions-asked sexual partners for nearly two decades. And as with nearly anything that smashes together great swaths of humanity, Craigslist is unavoidably utilized by individuals whose intentions are less than pure.

So everyone knows that Craigslist deals carry certain risks. Yet it’s still difficult to get a big-picture perspective of both the scale and the general tenor of crime on Craigslist.

To this end, we attempted to take a snapshot of what crime on Craigslist actually looks like by collecting every news story that mentioned a crime committed using Craigslist in the United States during the month of April and displayed that information on a single Google map*. Is this method scientific? Not even close. But it does allow us to view crime facilitated by the listing site in fresh light.

Just to be clear, this map does not attempt to be a comprehensive list of every criminal act that occurred through Craigslist during that 30-day period. Many crimes go unreported to the police, and many of those that do make the police blotter aren’t then expanded into stand-alone articles. Even so, the following map paints an interesting picture of the type criminal activities that pass through the site on a daily basis.

Click the box icon in the upper-right corner for full-screen view:

In total, we logged 74 different incidents occurring in 27 states and the District of Columbia. Eleven of the incidents resulted in violence. Three of those resulted in death. Another eight carried a threat of violence.

While the overall range of crimes that were committed was fairly wide, most tended to fall into a few distinct categories.

Surprising to no one, the single most prevalent crime was robbery, attempted robbery, or assault. People arranged a meeting over Craigslist and then, during the meeting, one party would rob and/or assault the other. During the month of April, news reports detailed twenty incidents of this type. It makes sense that this form of robbery is common because its almost guaranteed that people on either side of the transactions will bring something valuable to the meeting—either the goods for sale or the money intended to be used to pay for those goods.

The best way for people to keep themselves safe in these situations is to ensure that meetings take place in well-lighted, highly-trafficked public locations. One Chicago police department has even opened up its lobby and parking lot for people to meet for transactions initiated online.

Other common types of cases involve people having their personal property stolen and then later seeing it for sale on Craigslist, or someone selling an item through the site and never receiving payment or discovering that the payment they received was either in the form of counterfeit bills or a fraudulent check.

One particular type of crime stood out both for its specificity and prevalence.

The scam typically involves the victim responding to a listing for a rental property and corresponding with someone he or she believed was (or represented) the landlord or property manager. The victim would be sent pictures of the property but not actually be let inside. The victim would then be instructed to send a security deposit and/or the first month’s rent, often wiring the funds to an out-of-state account, and they would then receive keys to the unit.

Of course, those keys never came and the suspects with whom the victims were corresponding with had no actual connection to the property owners—they simply found an unoccupied housing unit and used it to swindle money out of unsuspecting people.

Aside from keeping an eye out for anything that seems out of the ordinary when renting an apartment through Craigslist, one simple way to weed out this type of scam is to do a Google reverse image search, which lets you put in an image to locate everywhere else on the Internet where that image appears. If the images associated with a property in Seattle, Washington, also pop up on apartment listings in, say, New York or Berlin, the listing was almost certainly posted by a scammer.

There were also two separate cases where people were arrested for attempting to locate a horse for the purpose of having sexual relations with it. Both of the cases came from Maricopa county, Arizona—make of that what you will.

On Craiglist’s site, the company has posted lists of how to avoid scams:

There’s also a list of tips on how to protect yourself from violence when dealing with people you meet on the site:

A spreadsheet including all of the data on the map can be accessed here.

*The dates listed on the map indicate the date on which the crime was committed or the arrest was made. If that information was not listed in the news report, the date of the news story itself was listed.