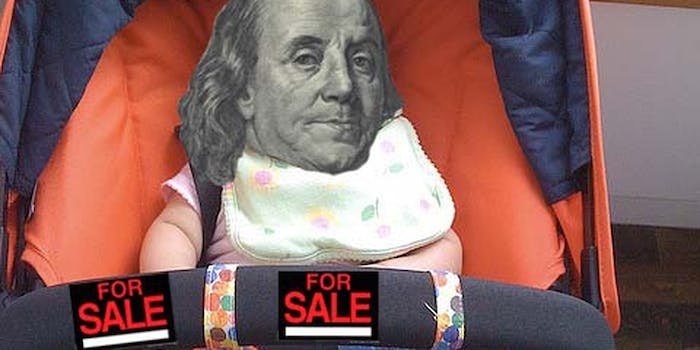 Man tries to sell baby for $100 on Craigslist—twice

The worst part: The baby wasn't even his.

The gift of life is so precious that it’s impossible to put a price on, but that didn’t stop one New York City man from trying. He decided a 2-month-old baby was worth at least $100 on Craigslist.

After chatting with a woman online, Paul Marquez of Staten Island was becoming frustrated by all of the attention she was showering upon her 2-month old daughter. Thus, he did what any of us would do: he took out a Craigslist ad and put the baby up for sale.

To his credit, Marquez placed the ad in the most appropriate part of the New York City Craigslist: the “baby+kids” section of the “for sale” category. The section typically contains listings for baby clothes and baby accessories—but not actual babies.

“Heyy I have a 2 month old baby name [redacted] she loves to play nd have her little fun but there is only 1 problem, the doctor said that she has asthma nd if she turns a certain way she can stop breathing, she’s really getting on my nerves nd I don’t want her Please email me,” the ad read, according to silive.com.

He capped off the ad with an asking price of $100, the mother’s phone number, and a picture of the baby.

His first posting, on July 29, was quickly deleted, something which Marquez failed to take as a) a hint that the sale wasn’t appropriate; b) one last chance at life without a criminal record.

He re-posted the ad on July 30. This time, it caught the attention of people who were not really interested in used strollers and bibs— the NYPD and the New York City Administration for Children’s Services.

Marquez was easily tracked down, arrested, and charged with second-degree aggravated harassment, endangering the welfare of a child, and two counts of a social services law violation called “authority to place or board out children.”

The mother, who has not been identified, said that someone actually responded to the ad, contacting her about purchasing the baby.

We can only hope that she won’t decide to adopt a dog down the road.