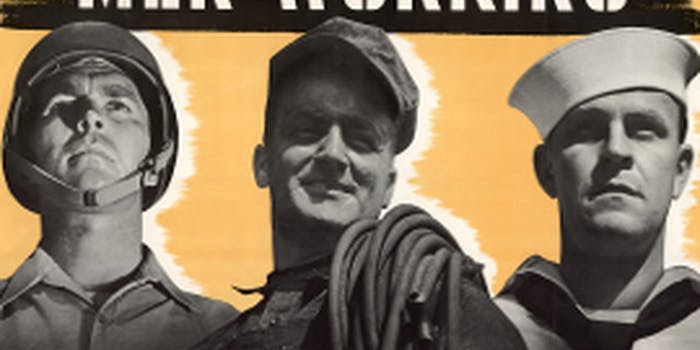 The "Arianna Pattek conspiracy" is just one men's rights facepalm after another.

The men’s rights movement is known for its vigilant attempts to publish private personal details of—or “dox,” as it’s called—any feminist, enemy, or inadvertent opponent who crosses its path. But as we saw with the Boston Marathon suspects, amateur Internet investigators often turn up the wrong people, leaving victims vulnerable to death threats.

When a pseudonymous blogger claimed to have rejected students at her university admissions office on the basis of their being “just dripping with white male privelege” [sic], men’s rights activists (MRAs) launched an attack on a Georgetown alum named Arianna Pattek.

There’s just one problem: The details of Pattek’s life are notably different from the stated facts about the blogger. And Georgetown is not happy that its former student has been wrongfully dragged into the fray and is now getting death threats from what it deems a hate group.

The incendiary blog post by “feministconservative” dates from June of last year. In it, the blogger describes her new job as an admissions officer, claiming to have rejected “over 50%” of white male and other applicants based on their levels of privilege, their anti-Israel stance, and apparent refusal to “integrate” or sympathize with minorities.

When Reddit and other MRA forums found the thread last week, several people immediately pointed out that the blog seemed like a fake, “too satirical to be real,” and that admissions processes at major universities are usually carried out by committee and rarely ever one person. But the MRA doxxing machine had already swung into action, and soon several people had landed upon a former Georgetown undergrad named Arianna Pattek as the culprit.

The primary link is the blogger’s academic thesis, allegedly for a doctorate in political science, written on “a comprehensive look at 21st-century radical movements such as ‘paleo’-conservatism, men’s rights, the neo-confederate movement, anti-zionism & political islam.”

Pattek’s thesis is for an undergraduate degree in Justice and Peace Studies at Georgetown. It looks at modern-day history distortion, specifically Holocaust denial and neo-conservativism. At the MRA watch blog ManBoobz, David Futrelle points out that not only are Pattek’s thesis and the blogger’s alleged thesis written for two different degrees, but the writing displays markedly different viewpoints:

The blogger, assuming she is even a real person and not the creation of a hoaxer, claims to be a “conservative feminist” and constantly bashes Muslims. Pattek, concerned about “marginalized groups,” seems to be anything but a conservative. The blogger’s writing style is crude and dogmatic, so much so that the blog reeks of hoax. Pattek, by contrast, writes smoothly and intelligently.

The theory that Pattek was the blogger had many, many critics—even former Ku Klux Klan president and presidential candidate David Duke. Still, many MRAs were convinced that Pattek was behind the blog. Some of them questioned Georgetown University directly via Twitter. Georgetown responded that “Ms. Pattek graduated from GU w/ a bachelor’s degree in 2012. She has never been employed by any GU admissions office.”

Instead of Georgetown’s direct rebuttal causing angry Internet users to back off from the claim, popular MRA blog A Voice for Men claimed Georgetown was in on a vast feminist conspiracy, evidenced by the fact that shortly after informing the MRAs that Pattek had never worked in their admissions office, Georgetown removed its link to her thesis, as well as her name, from its website.

Meanwhile, Pattek has deleted her Facebook account, which was linked to by MRA forums doxxing her, and set her real blog, where she blogged about her actual job working for the Peace Corps in Madagascar, to private. To some MRAs, the deletions were further proof that she was linked to the feministconservative blog. On one forum thread doxxing her, a commenter wrote:

[S]he has deleted her Facebook page. WHAT IS SHE TRYING TO HIDE? And, why are the people running the Georgetown University website deleting all references of her from their website? WHAT ARE THEY TRYING TO HIDE? By the way, what they are doing is a CRIME. They are deleting evidence and covering up evidence of one of their female staff committing the CRIME of discrimination based on a person’s gender. So once again, WHAT IS GEORGETOWN UNIVERSITY TRYING TO HIDE? Where there’s smoke, there’s fire.

According to Georgetown University, it was trying to “hide” Pattek from danger. Mark Lance, the current director of Pattek’s academic program, commented to Futrelle on ManBoobz to explain that they had removed Pattek’s information over concerns for her safety:

I just wanted to let folks [know] that her information was removed from some web sites at to protect her. This story was first picked up by Stormfront.org and the white supremacists [from that website] have been harassing and threatening her, including posting her home address, picture, etc. it was probably pointless, but the person who directed the program last year decided to remove the info. So, sorry, no conspiracy. Just an attempt to protect a young woman from vicious hate groups.

Although reportedly, the connection between Pattek and the blogger first arose at anonymous forum 4chan, the rumors have spread across the MRA blogosphere, from YouTube to Tumblr.

Efforts to find the real person behind feministconservative—if indeed s/he isn’t a troll or a satirical blog—seem to have waned as MRAs move on to other things. But for Pattek, it’s far from over: Reportedly, she continues to receive death threats.