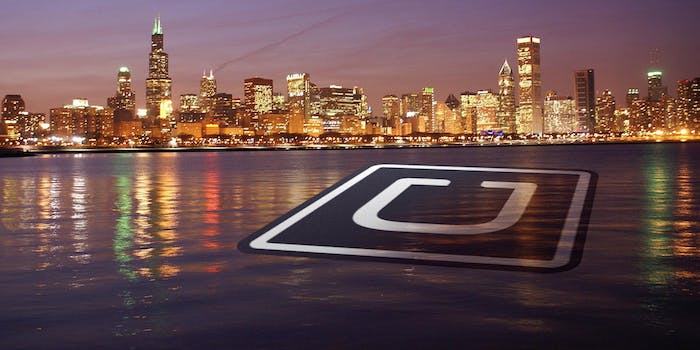 The car-service company Uber has allegedly terminated more than a dozen Chicago-based community-support representatives, according to internal emails obtained by the Daily Dot.

Four independent sources say that up to 15 people were fired last Friday for sharing an internal discount code for rides. Uber allegedly called it a “breach of policy.”

Uber has dealt with nonstop controversy and criticism over its company ethics in the past month. The company was recently banned in New Delhi following accusations of rape against a driver. On Monday, the city of Portland announced it plans to sue Uber due to an apparent disregard for laws governing for-hire vehicles. District attorneys in San Francisco and Los Angeles on Tuesday filed lawsuits against the company for failing to protect customers. And in November, a top Uber executive advocated that Uber hire a team of researchers to investigate journalists critical of the company.

Uber has also achieved massive financial success this year. A new valuation puts the ride-sharing giant ahead of American Airlines and Twitter, thanks to $1.2 billion in new funding.

Uber uses a third-party human resources firm, ZeroChaos, to manage contractors. Community-support representatives work for Uber through ZeroChaos, meaning they are employed by the company but don’t receive the benefits that come with being a full-fledged Uber staff member.

It was a ZeroChaos representative who sent the Uber contractors their termination notices. The Daily Dot received copies of the emails. Written in Comic Sans, the letters read, “Your assignment at Uber has ended effective immediately 12/5/14. Please log into the system and enter your final timecard.”

The fired representatives reportedly worked 40 hours a week and made $15 an hour. One described his former position as a simple desk job. “The work was mechanical and menial, but our bosses were cool and smart,” one source said. Each source asked to remain nameless for fear of retribution from future employers.

In late November, a full-time Uber employee distributed a promotional code, “UberEmployee17,” through an office group chat monitored by managers. The code, which offered a 17 percent discount on all Uber rides, was supposedly only intended for full-time Uber employees. Possibly due to a lack of explanation, support representatives assumed the code was a perk meant for them to enter into their personal Uber accounts. Each of the fired employees attempted to use the code, but they weren’t able to take advantage of it; the code apparently worked for full-time staffers only.

Because these contractors were required to link their @uber.com email addresses to their personal Uber accounts when they were hired, the company was able to see which employees had used the code.

On Dec. 4, almost two weeks after contractors entered the code into their personal accounts, contractors began receiving calls from a case investigator at ZeroChaos about “suspicious activity.” Any contractor who used the code was then terminated—first in a phone call, then in a confirmation email.

One source said he told the investigator he assumed the code was intended for them. It had allegedly been distributed through internal chats with no mention that the employees could not use the code. In separate statements to the Daily Dot, three former employees said they saw colleagues entering the code and simply followed suit.

According to a former employee, the investigator said on the phone that Uber was investigating a “breach of policy.” He allegedly told the contractors not to come to work the next day, and that the company would “let you know by end of business day tomorrow if we continue your contract or not.” By 3pm the next day, the investigator called back to confirm that the contractor was terminated. One colleague was escorted out of the office by security, the source said.

One contractor says he was “befuddled” as to why Uber would terminate half of its central support talent, including top performers, right before the holiday season—often the busiest time of the year for on-demand car services. This contractor added that his termination was “absurd” when compared to Uber executive Emil Michael, who last month suggested the company spend $1 million to create a team that would look into the personal lives of journalists and their families in order to fight back against negative press. Michael got to keep his job, the source said, “yet a number of representatives innocuously apply a promo code they were under the impression they were allowed to use, and they all get fired.”

Multiple contractors who were terminated on Friday said they had never heard of any previous mass firings at Uber.

Neither Uber nor ZeroChaos responded to a request for comment.

One former contractor described working for Uber as “disorganized.” “Not a lot of communication between the higher-ups and our managers,” he said. As an Uber contractor, he said, nobody was really sure what they were supposed to be doing—“but you kind of just hope you’re doing it right and there aren’t any terrible repercussions.”