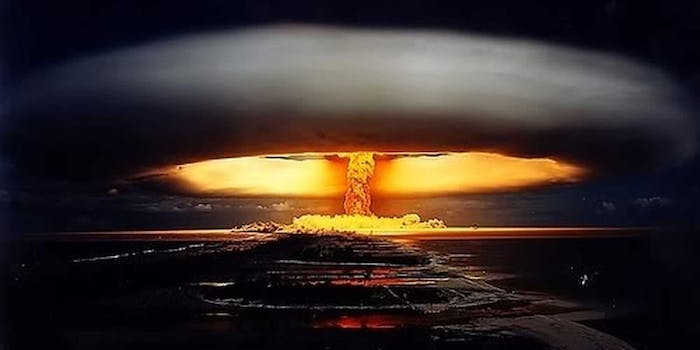 In the event of a nuclear holocaust, the only survivors may be cockroaches and Bitcoin.

Eager to secure the digital currency from atomic bombs, government regulators, and other threats, a mysterious Swiss Bitcoin entrepreneur is building shelters for the ultra-secure storage, trade and mining of Bitcoin. It’s a move that could transform Switzerland into the same financial haven for digital currency that it is for traditional money.

On Tuesday, Forbes introduced the world to Richard Porubcan, the pseudonymous character behind a firm converting a number of Swiss nuclear fallout shelters into Bitcoin bunkers. He hopes his bunkers will serve as vital nodes for the decentralized Bitcoin network in the event of disaster or government crackdown.

“Bitcoin is gaining traction,” Porubcan told Forbes‘ Jasper Hamill. “This means the hardware infrastructure needs to be secured in the best possible way. A former bunker of the Swiss Army supplies all we need to give this desired level of security.”

Switzerland is littered with defunct nuclear fallout shelters. Some 7,000 government shelters were built during the Cold War for the purpose of housing the nation’s entire populace. But with the collapse of the Soviet Union 22 years ago, the specter of global nuclear annihilation seems to be in the rear view mirror, and the Swiss government has recently started allowing private firms to buy or rent the neglected bomb shelters.

Porubcan, the owner of Bitcoin mining operation GMP, decided to seize this opportunity and expand the scope and nature of his business. Since June of 2012, GMP has mined about 200 Bitcoins, amounting to roughly $40,000 at the current exchange rate. His business is rated “white” by the Cryptostock exchange, which according to Hamill is a “sign that he has been playing by the rules and not ripping off investors.”

But this new project could potentially take Porubcan’s business to the next level. He’s offering his bunkers (of which he says two are already operational with plans for more to go online in the near future) to other Bitcoin miners and traders, with the hopes that they become a hub for Bitcoin enthusiast seeking the most secure home for their currency.

To store Bitcoin in his bunkers, users can seek out Porubcan online through various Bitcoin discussion boards and websites. Users can even store their own hardware in Porubcan’s bunkers at a rate of 0.59 Swiss francs per kilowatt hour, if he deems their machines secure enough.

Porubcan would not disclose to Forbes the locations or specifications of the bunkers themselves; only to say that these “military-grade” facilities house independent power supplies with secure Internet connections and redundancy systems to ensure the shelters “never fall off the grid.” Each bunker is protected by a giant vault door, video cameras and an alarm system. The systems inside the bunker are able to run independently for four weeks without outside assistance.

Though these bunkers are obviously designed to protect their contents from a nuclear blast, its not the main reason Porubcan expects users to flock to his high-security storage facilities.

As Hamill puts it, Porubcan wants the bunkers to serve as a “digital Noah’s Ark” for cryptocurrency speculators and traders who fear the encroaching hands of world governments that may move to tax, regulate or completely outlaw Bitcoin. These computer bunkers could be the new thing people refer to when they talk about having “a Swiss bank account.”

“The world is becoming increasingly dangerous, so it’s a good place to have somewhere which can be certified safe from nuclear or electromagnetic pulse destruction,” Porubcan said. “The world needs security. Even when our offering is just in the cryptocurrency area, I see it as the next small step towards a secured value transfer environment of the 21st Century.”